After hearing so much of this state's bad press over the years regarding Jeb Bush, Rick Scott, Florida's hellish foster-care system, the violent Trump rallies, the brutal murder of Trayvon Martin, the climate catastrophe and all the other horror tales about Flora-duh, I was totally dreading my trip to St. Petersburg -- but still had to go there.  Had an important book conference to attend at the historic Vinoy Hotel. 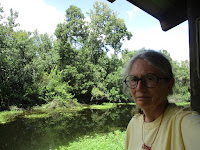 But guess what?  I actually liked St. Petersburg.  Everything there was so green and balmy and lush.  They had great public transportation.  The Cuban hot-pressed sandwiches were almost biblically delicious.  I totally went off my health-food diet and ate Key Lime pie in an actual diner.  I walked around in the swamps, er, wetlands.  I got caught in the tail-end of Tropical Storm Gordon (not Gordon Ramsey, BTW, but it was definitely a bit like being in Hell's kitchen).  I visited two excellent libraries.  I stayed in a trailer.  I had a fabulous time and came home with an actual suntan and 40 pounds of free books!

I also talked with a social worker there who said that, yes, there was a problem with the foster-care system.  "Some retirees supplement their income by taking in foster kids, receiving $500 a month from the state, feeding their wards on rice and beans and then pocketing the rest.  And some of the charter schools here are atrocious too."  Okay.  So those rumors are true.

But geez Louise.  The beaches, the balmy night air around midnight, the kindness of strangers and the fact that everywhere you look you see tropically green plants smiling back at you.  Just imagine what this place looked like before 1492!

PS:  Another big reason that I had such a great time in Flora-duh is that I had just finished reading a rather scary article in Dissident Voice about how it is totally possible that the human race may become extinct as soon as 2026 -- and that's only eight years from now!  So I'd better start trying to "live fast, die young"?  Too late for that!  But at least I will die knowing that I'd been to almost-paradise.  https://abc.go.com/shows/bachelor-in-paradise

According to this article, "There is a group of courageous and prominent climate scientists who offer compelling climate science evidence that human beings, along with millions of other species, will be extinct by 2026 (and perhaps as early as 2021) in response to a projected 10 degree celsius increase in global temperatures above the pre-industrial level by that date."  https://dissidentvoice.org/2018/09/human-extinction-by-2026/

PPS:  And also please be aware that the major Number One cause of climate catastrophe today is "war".  America's war profiteers may not be dropping bombs on our own neighborhoods like they do on Syrian, Yemeni, Afghan and Palestinian neighborhoods -- but nevertheless War Street is also murdering us too (only more slowly and with fewer Technicolor special effects).  http://www.informationclearinghouse.info/50217.htm

Stop Wall Street and War Street from destroying our world.   And while you're at it, please buy my books.  https://www.amazon.com/Jane-Stillwater/e/B00IW6O1RM
Posted by Jane Stillwater at 11:36 AM