Greed without borders: Watching the Deep State eat its young

Ever since before TV was even invented, there's been a really huge reality show being broadcast here in America.  It's called "The Deep State Show".  And yet despite its consistent rating as the longest-running reality show ever and even despite its presence in every single aspect of our lives, the average American has hardly even heard of it and never even gets to watch it either.  Nobody here ever asks their friends the next day, "Hey, did you see the latest episode of 'The Deep State Show' last night?"   In fact, nobody in America has hardly even heard of the Deep State Show before -- until now.

Because, although the Deep State has been successfully eating its young in other parts of the world for the past century or so, it appears there are almost no more young in the rest of the world left to eat and so now it has started to eat ours too.

"You need to define your terms, Jane," you might say.  Why?  Defining one's terms is boring.  But okay.  I'll give it a shot.  It's the freaking military-industrial complex.  It's Wall Street and War Street.  It's those dudes in three-piece suits who plot ways to steal the resources out of all the other countries on earth -- and now that the rest of the world has been pretty much sucked dry, they have come after America's resources too.

It's the guys who live in penthouses and drive Ferraris yet get their knickers all in a twist when the rest of us Americans even dare to drive a used Hyundai or buy a fixer-upper out in the sticks.  It's those greedy welfare capitalists who won't let the rest of us have a safety net too.  That's who it is.  Capisce?  https://www.politicalorphans.com/the-article-removed-from-forbes-why-white-evangelicalism-is-so-cruel/

In our desperation these days, we more savvy Americans are actually starting to question the Deep State.  And so the Deep State Show throws us a scapegoat, a bone.  All fingers now point to Donald Trump instead of to the actual men behind the curtain.  Duh.

All this talk about building a border Wall and about uppity Black people is just to get us to hate each other instead of hating the worst reality show ev-ah.  And yet what is at stake here is our own reality as well as the Deep State's.  It is our young that are now getting eaten. 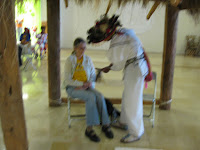 Well, now that I've got all that off my chest, what happens next?  I wanna go down to Guadalajara.  "How's that going to help?" you might ask next.  Because thousands of people from Central America and Mexico, the ones who have already had their young eaten by The Deep State Show decades ago, are now trying to come to America and show us, "This is what it looks like to have your hopes and treasures destroyed.  This is what you too will look like in another couple of years, after the Deep State has had its way with you too."  https://www.buzzfeed.com/adolfoflores/caravan-mexico-honduras-trump-immigration?utm_term=.duRR7kLxVP#.plAkDlpnW8

So.  Hundreds of people have been marching through Mexico in the last month.  They have gotten as far as Guadalajara and are now on their way to Tijuana, carrying banners that read stuff like," We want our lives back!"  And I want to join them.  Why?  Because I don't want my young to be eaten by no greedy old dudes on a reality show either.  And neither should you.

PS:  If anyone actually knows anything about how I can actually get to Guadalajara and join the march, please let me know.  And please don't tell me to ask Donald Trump -- or ask the Deep State Show either.

Stop Wall Street and War Street from destroying our world.   And while you're at it, please buy my books.  https://www.amazon.com/Jane-Stillwater/e/B00IW6O1RM
Posted by Jane Stillwater at 8:25 AM