I'm one of the most disorganized people I know.  So imagine my shock when I arrived at a recent Netroots Nation convention in Atlanta, Georgia, and found myself in an auditorium filled with over a thousand Progressives, all of whom just love to organize stuff -- everything from national politics to sock drawers.

I almost fled in panic.

However, guilt and the idea that I might actually learn something forced me hang around.  That -- and the prospect of free hors d'oeuvres.  "Let's unify, focus and organize!" said the first speaker.  "And stop trying to be Republican-lite.  Make your argument and make it unapologetically.  Include conservatives in your vision.  Be honest about what you believe.  We gotta emphasize the idea of creating a true Public Good for all.  And we gotta organize!"

The next speaker talked about money -- and how to organize it too of course.  "Our banks are bullying us into using our own money to violate our moral values," he said.  "And three out of four Americans are currently not in a position to handle any emergency situation the costs more than $700."  Flat tire on the freeway?  We're screwed.  "Economic uncertainty is the one experience that unites us Americans.  We gotta organize around that."

The mayor of Tallahassee spoke next.  Andrew Gillum.  He is running for governor of Florida.  "If you are not sitting at the political table, then you are on the menu," he said.  I'd vote for him -- but then I'd have to move to Florida.  Too hot.  https://andrewgillum.com/?nosplash=true

Stacey Abrams, a candidate for the governor of Georgia, spoke next.  "We believe in the power of the government to do good.  And we have to build on that power to do good -- from the ground up!"  Guess that means that we gotta organize?  Yep.  Abrams herself is responsible for registering something like 250,000 voters.  How organized is that!  https://staceyabrams.com/

Then my very own Congressional representative Barbara Lee spoke next.  I'm still kinda mad at her for voting to support sanctions against Russia.  Who do they think they are in Congress?  Gods?  America has sanction plans for Iran, Russia, Venezuela and who the freak knows where all else.  Will China, the EU, Latin America and Africa be next?  Who the freak are we gonna have left to trade with?  Ourselves?  Plus how come everyone is so hot to sanction Russia but hates sanctioning those creepy Israeli neo-cons who are human-rights violators on a horrific level?  Now BDS is a no-no?  Why?

"We need to apply street heat," said Rep. Lee.  "We need to organize!"  Big ovation.  She is definitely preaching to the choir.  "My grandmother was raped by a White man and the only reason they let my mother into a segregated hospital to have an emergency C-section was because she was half White.  And that baby who almost died was me."  http://lee.house.gov/

And then my sweet little point-and-shoot camera got lost and/or stolen so you won't be able to see my selfie with the next speaker -- Elizabeth Warren.  And, please, Elizabeth.  Don't tell me to organize!  I can't even get my own camera under control.

"We are not going back to the days when Democrats were too chicken to fight Wall Street.  And it's not just Trump that is causing this crisis.  When he is gone, the crisis will still be there.  Clean water, no wars, campaign reform, women's rights.  We need to lead the Democratic party back from the wilderness.  We can care about the White working class and Black Lives Matter too.  They both have something in common.  Their rights are both being ripped away!"

And how do we stop this?  "Organize!  The system is rigged against us and has been for a long, long time.  But there are more of us than there are of them.  And it's also time to say that Democrats are on the side of American values."  Not constantly siding with the immoral values of Wall Street and War Street.

Then word came down about the Charlottesville tragedy.  And, boom, just like that -- within five minutes, over a thousand (mostly White and middle-class) convention attendees had organized themselves, created improvised signs in protest against fascism and marched through the streets of Atlanta all the way to City Hall.  I'm telling you.  When it comes to organizing, these Netroots Nation attendees were awesome!

So what else did I learn from this convention?  That each of us Americans has to make a very important choice in the coming days:  Either we join these idealistic organizers and, like them, work for the good of all Americans -- or we turn to the Dark Side of selfishness, greed, bigotry and hate and break our country into pieces.  To paraphrase Jerry Lee Lewis, "There's going to be a whole lot of grassroots organizing going on!" when these most excellent organizers return home.  Will we be with them or against them?

PS:  I was very disappointed that there were almost no panels or discussions regarding the subject of "war" at this convention -- especially since over 60% of America's budget is wasted on stuff like greedy contractors, supporting al Qaeda and slaughtering babies in the Middle East for fun and profit.  Americans need to organize around stopping America's many evil "wars" as well.  https://consortiumnews.com/2017/08/21/covering-up-the-massacre-of-mosul/ 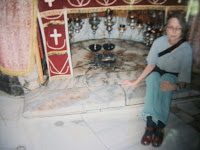 PPS:  America claims to be a "Christian" nation and yet acts like it has never even heard of either the Golden Rule or the holy Philosopher King who told us about it 2000 years ago.  But next week I actually have a chance to visit the birthplace of this great Philosopher King -- Bethlehem!  Will let you know how that goes.

"Dear Jesus," I will tell him, "America's leaders today have systematically organized my poor corporate-dominated country to go against every single thing that you stand for.  Good God, will you please do something about that!"

Posted by Jane Stillwater at 10:00 AM