OMG: The churches of Mexico City

Just how effective is the power of prayer?  For many of us who are poor and helpless, prayer is the only WMD that we can get our hands on.

Prayer is our AK-47, our Uzi, our nuclear missile, our Glock.  It is the only defense that we have against the slings and arrows that are constantly aimed at our hearts by those more rich and powerful and brutal than we are.

In Mexico City, the Sacred Heart of Jesus has become our bunker, our NORAD, our Marine Corps and even our numbered bank account in the Caymans.

But are we -- the victims, the vulnerable, the unprotected, the powerless -- are we actually being armored and protected by prayer or is it just wistful thinking because we have nothing else?  Who knows.

Are the poor and defenseless in places like Yemen, Ferguson, Honduras, Tibet, Syria, Ukraine, Standing Rock, Afghanistan, Gaza and Libya actually being protected by their prayers to Yahweh, Allah, God, Buddha, Shiva, the Great Spirit, etc.?

Will my own heartfelt and constant prayers for world peace ever be answered?  Who the freak knows?  They haven't been so far.  However, realistically, do we who are the meek and wretched of the earth really have any other choice? 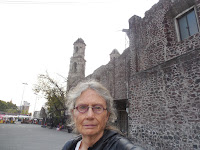 And here in Mexico City, like everywhere else, the defenses of we the defenseless are limited too -- and yet here in both the grand cathedrals and the humble churches by the side of the road, the defenseless grandmothers and beggars and disabled and working stiffs and vulnerable salt of the earth all continue to pray.

PS:  Here's another thing that we clearly need to pray about: America's government!

According to The Saker, a trustworthy political blog site, there is currently a huge clash of Titans going on far above our heads -- as the neo-con Deep State struggles to discredit, impeach, assassinate and/or eliminate (wait for it!) Donald J. Trump.  Any way that they can.  Apparently those guys really really really hate The Donald -- even more than the Left in America hates him.  And that's saying a lot.

With regard to the phony intelligence document recently leaked by John McCain, The Saker warns us that, "After several rather lame false starts, the Neocons have now taken a step which can only be called a declaration of war against Donald Trump...  This is a political coup d’etat."

But.  "If a coup is staged against Trump and some wannabe President à la Hillary or McCain gives the order to the National Guard or even the US Army to put down a local insurrection, we could see what we saw in Russia in 1991: a categorical refusal of the security services to shoot at their own people.  That is the biggest and ultimate danger for the Neocons: the risk that if they give the order to crack down on the population, the police, security and military services might simply refuse to take action." http://www.informationclearinghouse.info/46202.htm

PPS:  Let us also pray that the police, security services and National Guard in North Dakota finally refuse to take action against the brave Standing Rock protesters too.  http://www.motherjones.com/environment/2016/12/standing-rock-police-militarized-emergency-management-assistance-compact-north-dakota

And also let us pray for the soggy and cold protesters on the much-raided "Poor Tour" in my hometown of Berkeley, CA.  They are protesting the criminalization of being homeless in America and need all the help they can get.  You don't have to go thousands of miles away to find something to pray for these days.  https://www.facebook.com/firsttheycameforthehomeless/

Posted by Jane Stillwater at 8:28 AM