"We ain't no second-line club!" one of the drummers in a New Orleans marching band on Canal Street shouted at me in disgust.  I was obviously a tourist who was too ignorant to be able to tell the difference.  Oops.

In a voodoo shop a few blocks away in the French Quarter, I saw an incense-laden alter covered with offerings to some long-ago African god.  https://www.yelp.com/biz_photos/voodoo-authentica-new-orleans

Over by St. Louis Cemetery No. 1 on Basin Street, you could see where the famous Iberville red brick housing projects were being converted into what appeared to be high-end condos.  http://smirkingchimp.com/thread/bill-quigley/4301/the-public-housing-struggle-in-new-orleans-a-tale-of-two-sisters

That's just like what is happening now in my home town, Berkeley -- only our mayor doesn't need no stinking Katrina for an excuse.  http://www.berkeleydailyplanet.com/issue/2016-03-25/article/44301?headline=How-the-Bates-Development-Plan-Would-Destroy-Flatlands-Berkeley--Steven-Finacom

At night in the Vieux Carré, hordes of drunken ex-college boys try to relive their cherished memories of past spring breaks as they stumble from bar to bar, holding plastic cups filled with beer and booze, barely aware of the hard-rock music that blasted their ears.

On the corner of Chartres and St. Louis, there was a bronze plaque on a building that read, "Within this historic structure slaves were sold..." 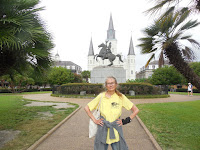 By day the French Quarter is a charming place -- happy people strolling past boutiques, beignet cafes and the Napoleon House (built to shelter the Emperor himself after his exile http://www.napoleonhouse.com/history/), and always with the mighty Mississippi River rolling along in the background.

But by night the entire French Quarter turns into one gigantic and raucous block party, the Big Easy For Dummies.

I love the French Quarter.  What's not to love!  But there was one thing there that did horrify me -- the magnificent St. Louis Cathedral, an awesome and moving homage and tribute to a powerful and benevolent God, father of the Prince of Peace.

And as I sat in a front pew, surrounded by stained glass windows, arches and candles, I could just imagine the smug plantation owners and their families worshiping there back in 1794 -- while right down the street from them human beings were being branded, whipped and sold off like cattle.

Apparently Black lives didn't matter back then -- either.


PS:  Even today, righteous pseudo-Christians still sit in their church pews and smugly proclaim themselves to be keepers of the faith -- while America bleeds from the heart from all its extra-judicial and war-crime slaughter of their fellow human beings both here and abroad.

Millions have been butchered in Asia, Eastern Europe, Africa, the Americas and the Middle East by these so-called Christians who have the audacity to sit in their church pews on Sundays and proclaim themselves to be more than just plain serial killers. http://www.globalresearch.ca/u-s-coalition-intelligence-operations-room-inside-syria-destroyed-by-russian-missile-attack-thirty-israeli-american-british-turkish-saudi-qatari-intelligence-officials-killed-report/5547099

"Let the good times roll."  And the heads.

Posted by Jane Stillwater at 7:41 AM