Ever been to Chicago?  Why would you even want to go there?  For the pizza!  And the books.  The 2016 BookExpo America was just held in Chicago.  You walk into the huge McCormick Place exhibition hall and right before your very eyes there are hundreds of booksellers, all wanting you to look at their stuff -- or to meet their authors.  Or, better yet, wanting to give you a free book!

But by now I'm wise to the tricky ways of book conventions.  When I first started attending them, I used to bring home all kinds of free books.  Now I only bring home the ones that I know I will read -- such as my advance-review autographed copy of Kareem Abdul-Jabbar's "Writings on the Wall".  I can hardly wait to dive into that one.  Plus I actually got to meet him.

Then I met the authors of "The Heart of the Fight," a book that tells us that having marital battles can actually help a relationship instead of hurting it, but only if you know how to fight correctly.  Gotta read that.  Not that I'm married or nothing -- but I know lots of people who are. http://www.heartofthefight.com/ 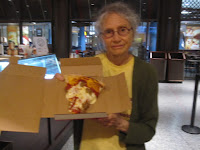 Also, after reading this book, I realized that the rules of fighting fair and square (and with effective results) can also be applied to fights between nations -- or between neo-colonial invaders and the countries they invade.  To judge them by this book, American neo-colonialists blow things up and murder people and destroy the planet because they aren't getting what they need in their lives and can't "break free from their limiting beliefs and behaviors," ones that involve taking the entire human race down with them.  http://chasfreeman.net/americas-continuing-misadventures-in-the-middle-east/

I also stayed at the South Loop Hotel, located in an area formerly known as Chicago's South Side.  All those housing projects are gone now.  Gone.  Leaving nothing but new yuppie condos and vacant lots.  And DeMichael's Market, where I subsisted on its corned beef sandwiches and Traders Point yogurt (when I wasn't out actively searching for pizza).  https://www.facebook.com/DeMichaelsMarket/

I also met authors Terry McMillan, Sebastian Junger, Colson Whitehead, Jennifer Chiaverini, Faith Salie and I forget who all else.  And man whose wife wrote a children's book gave me a ride to the convention center and a copy of "Gertrude and Toby's Friday Adventure".  Your kid will love it.  https://www.amazon.com/Gertrude-Tobys-Friday-Adventure-Shari-ebook/dp/B01BL1ABTQ?ie=UTF8&qid=1463434127&ref_=la_B019PZP1YA_1_2&s=books&sr=1-2

But now let's talk about pizza.  Connie's Pizza was just so freaking good!  http://www.conniespizza.com/  And I even found a restaurant that served gluten-free pizza.  I ate the whole thing.  https://giordanos.com/  I shoulda ate more pizza in Chicago.  I shoulda read more books.  But I got distracted by a wild party in Bronzeville and just barely missed getting arrested.  But if I had gotten arrested, then I could have reported back on whether they served good pizza in jail.

PS:  On my way up to see Navy Pier, the #29 bus drove right past Trump Tower.  Which got me to thinking about what it would be like to have "The Donald" as president.  He's bad -- but "The Hillary" would be far, far worse.  Trump talks the talk about being down on Muslims, but Clinton actually goes out and kills them.  Can America afford another Libya?  No, no, no and no.  Vote for Bernie.  https://consortiumnews.com/2016/04/16/yes-hillary-clinton-is-a-neocon/

Posted by Jane Stillwater at 8:22 AM