Lost in Chicago with a Palestinian holocaust survivor 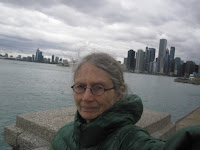 One would think that getting around Chicago by riding its elevated train system would be like a piece of cake.  All you gotta do is pay your fare and then get from Point A to Point B.  But one would not be counting on my highly-elevated ability to get lost.  Anywhere.  From Antarctica to Alaska, from the Melbourne to Mecca, from Walgreens to Walmart (except I never go to Walmart because they rip off the working class), I can still manage to get lost -- and so Chicago's "L" system proved to be no different from anyplace else.

But when I found out that Mariam Fathallahan, an 86-year-old survivor of the 1948 Palestinian holocaust, was speaking in Park Ridge, a suburb of Chicago, I decided to take a risk.  This was a rare opportunity to hear her speak, so I jumped on the Green Line of the "L".  And jumped off again -- onto the Red Line.  "You need the Blue Line to get out to Park Ridge," someone finally told me, "but not the Pink, Orange or Brown."  They got a pink line in Chicago?  How cool is that!

So I got off that train and onto another train and then onto another train again.  And ended up at O'Hare airport.  But finally found the right station and then street-hiked east for a mile.  So far so good.  Only got lost three times.  And when I got to the event, there was lots of free food!  Hummus and falafels.  Well worth the trip.

Over baklava, I got to talk with this refugee from the 1948 Palestine "Catastrophe" -- and she was delightful.  Jews don't have a lock on delightful older holocaust refugees who have lived through Hell and survived, moving on to become wise people who are anti-war right down to the tips of their toes. http://www.candlesholocaustmuseum.org/  Many Native American holocaust survivors are like that as well.  And also survivors of Reagan's 1980s ethnic cleansing of the Maya in Guatemala.  But I digress.

As the evening wore on, it started raining cats and dogs outside and had gotten really really dark so I had to leave early so I could find my way back.  But I heard later that the rest of the presentation went well.  http://www.columbiatribune.com/news/local/palestinian-refugees-talk-about-living-without-a-state-at-columbia/article_19d69746-d60a-5208-9230-29cde5acdd00.html

Amena Ashkar, Fathallah's translator and also a refugee who was born in the camps in Lebanon, had really interesting stuff to say.  "When Israel invaded Lebanon in 1982, their main purpose was to get rid of Palestinian refugees," and thus continue the Israeli neo-colonialist brutal ethnic cleansing of Palestinians.  Having survived one holocaust already, Palestinians were then subject to yet another holocaust in Lebanon.

"Does Israel have a right to exist, you might ask me?" said Ashkar, "and my answer is this:  Do I also have a right to exist as well?"  Someone else added that it is definitely not cool to ask a rape victim if she recognizes the rights of her rapist.  http://www.commondreams.org/views/2016/05/21/widening-cracks-zionism

So in the dark of night and pouring rain, I stumbled around the suburbs of Park Ridge, totally and hopelessly lost -- until I finally saw a faint light in the distance.  It was a Walgreens!  "You walk a mile south then cross a bridge over the freeway and then walk a mile more," said the friendly and helpful clerk.  Great, just great.  And then I also found out that parts of suburban Chicago have no sidewalks.

And somehow I finally made it back to the South Loop Hotel and took a hot bath.  http://www.chicagosouthloophotel.com/

But how many Palestinian holocaust refugees today even have that option -- to take a hot bath?

PS:  One of the main reasons that I truly dislike the Clinton-Trump presidential ticket is because they both seem to be taking great glee at the thought of killing even more women and children in the Middle East than have already been maimed, slaughtered or made homeless by American-made bombs.  Don't all those millions of victims of the Bush-Obama-Clinton-Trump doctrine in the Middle East hate us enough already?  http://dissidentvoice.org/2016/05/bernie-comes-to-vallejo/#more-62696

PPS:  I'm not the only one that gets lost easily.  America too has lost its way.  Instead of heading toward the bright boulevards of Life, Liberty, the Pursuit of Happiness and the Golden Rule, my country has completely lost its way inside a labyrinth of dark alleys that go nowhere -- and have scary names like "Regime Change" and Genocide" and "Homelessness" and "Outsourcing".  https://consortiumnews.com/2016/05/17/the-danger-of-demonization/

PPPS:  News just in from my Syrian friend that yet another massive suicide bombing by ISIS/al Qaeda just took place in Syria.  And the American neo-con RepubliDems are now jumping with joy.  "Soon Syria will be another Libya!" they whisper behind their hands.  And at the rate that Wall Street and War Street are supporting al Qaeda and ISIS, America will soon become another Libya too.  http://www.globalresearch.ca/the-wests-massacre-of-the-innocents-in-syria/5525865

"It's really bad over there today," writes my friend.  "And the West's pro-zombi media is celebrating their 'victory' on the 'infidels'!  But the pattern is so simple though:  Whenever the Syrian Arab Army and their allies win against the ISIS and al Qaeda terrorists and armed gangs, then the terrorists target the civilians, not the army!  They are blackmailing the Syrian government and army by targeting the people.

"I can imagine the Saudis, Turks, Qataris and whoever else is behind them [American and Israeli neo-colonialists!] saying to the Syrian officials in the negotiations:  'If you won against our militias or if you are not going to surrender, we gonna order them to slaughter more civilians -- and the Western media won't even mention Syria's dead (or our crimes).'        "I wish that these criminals would not be allowed to get away with their crimes.  And I also wish to witness their judgement day for the horrors they have inflicted on Syria."  Me too!
Posted by Jane Stillwater at 10:41 AM