Purely by coincidence I have started reading two different books about American history -- but they both have the same theme.

One book, "1776," tells the emotional story of how heroic yeomen-farmers and shop-keepers in America put together an amazing rag-tag army and heroically risked defeat and death in order to fight for justice, liberty and the very soil of their own country, in order to defend it against tyrannical despots from across the sea.  http://www.goodreads.com/book/show/1067.1776?from_new_nav=true&ac=1&from_search=true 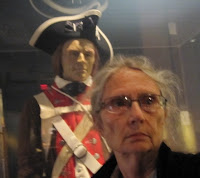 The other book, "Overthrow," also tells emotional stories of how heroic yeomen-farmers and shop-keepers across the globe have put together their amazing rag-tag armies and heroically risked defeat and death in order to fight for justice, liberty and the very soil of their own countries, in order to defend them against tyrannical despots from across the sea.  http://www.goodreads.com/book/show/90540.Overthrow

Reading about the overthrow of Britain by brave American rebels in 1776, and then reading both here and elsewhere about the overt or covert overthrow of the legitimate governments of Hawaii, Cuba, the Philippines, Honduras, Puerto Rico, Panama, Nicaragua, Iran, Mexico, Palestine, Vietnam, Chile, Taiwan, Guatemala, Argentina, Grenada, Congo, Angola, Lebanon, Haiti (twice), Yugoslavia, Afghanistan, Iraq, etc. by tyrannical American invaders is all just too deja vu for me.  http://www.americanrhetoric.com/speeches/stokelycarmichaelblackpower.html

"Since independence in 1776, the U.S. has been engaged in over 53 military invasions and expeditions....  America is using ISIS in three ways: to attack its enemies in the Middle East, to serve as a pretext for U.S. military intervention abroad, and at home to foment a manufactured domestic threat, used to justify the unprecedented expansion of invasive domestic surveillance."  http://www.globalresearch.ca/america-created-al-qaeda-and-the-isis-terror-group/5402881

In addition, America has also continually missed its many chances to follow the example of our heroic 1776 ancestors and help overthrow a lot of tyrannical despots across the globe too -- such as Saudi Arabia, where the 9-11 plot was actually hatched, or Israel, where the 9-11 plot was cheered on.  Instead, America has made these tyrants and despots some of their closest allies.  What's with that?  http://www.france24.com/en/20160415-obama-faces-pressure-saudi-arabia-trip-secret-28-pages

And America should also stop supporting ISIS in Syria and Iraq as well.  Syria under President Assad just held a parliamentary election.  Can American-supported "moderate rebels" aka ISIS make that claim too?  No, no and no.  In fact, the Syrian election results were delayed a few days because several ISIS-held sections of Aleppo weren't allowed to vote.  Just one more example of America backing tyrannical despots -- in this case ISIS.  George Washington must be rolling over in his grave.

And in France these days, liberty, equality and fraternity are only remembrances of things past as well.  Lafayette, they are no longer in France either.   It's all about Le Patriot Act.  http://en.shafaqna.com/news/32043

How far have American ideals and values fallen since 1776?  About as far as humanly possible.  "We have met the enemy and they are us," to quote Pogo.  https://www.rt.com/news/339672-iraqi-youth-usa-enemy-poll/

PS:  Speaking of books, the annual BookExpo America will be held in Chicago this year, starting on May 11 -- and I'm going to be there.  Try to be there too, okay?  http://www.bookexpoamerica.com/Home/
Posted by Jane Stillwater at 9:08 AM