My apartment was completely disorganized and so I went to the library and checked out a book entitled, "The Life-Changing Magic of Tidying Up".  The author, Marie Kondo, talks about how to avoid the "vicious circle of tidying".  Holy cow!  That must be avoided at all costs!  http://tidyingup.com/books/the-life-changing-magic-of-tidying-up-hc

And we also clearly need to put some life-changing magic to work in tidying up the Middle East as well.

President Endogen of Turkey definitely needs to get folded, sorted and put back into whatever sock drawer he came from.  The guy is a mess and he's been out cluttering up Syria with his ISIS buddies for far too long. http://www.cumhuriyet.com.tr/haber/english/84325/Turkey_removes_al-Nusra_from__terror__list.html#

Hillary Clinton also needs to be shoved back into the closet ASAP -- before we trip and fall over her messy weapons stashes, Libya disasters and AIPAC suck-ups (again) and American taxpayers (again) get seriously hurt.  http://www.truthdig.com/report/item/hillary_clinton_full_neocon_aipac_demonizes_iran_palestinians_20160322

Donald Trump doesn't seem to have a clue about what is going on in the Middle East.  The "vicious circle of tidying" has obviously sucked him right in.  Enough said about that. 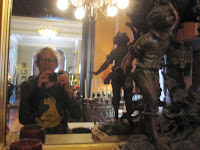 And what about Obama and his greedy pals on Wall Street and War Street?  Let's get out our garbage bags and kick all them to the curb.  What is the opposite of "tidy"?  Chaos.  And these guys have left the Middle East in total chaos -- and Europe, Latin America and Africa in chaos as well.  Plus, due to these guys' sloppy housekeeping, the American economy also needs some life-changing tidy-up magic right now.  And too many of our sons and daughters have misplaced limbs due to them.

According to Stephen Kinzer of the Boston Globe, "Washington-based reporters tell us that one potent force in Syria, al-Nusra, is made up of 'rebels' or 'moderates,' not that it is the [the very un-tidy] local al-Qaeda franchise.  Saudi Arabia is portrayed as aiding freedom fighters when in fact it is a prime sponsor of ISIS.  Turkey has for years been running a 'rat line' for foreign fighters wanting to join terror groups in Syria."  All theses media lies need to be immediately tidied up.  http://www.bostonglobe.com/opinion/2016/02/18/the-media-are-misleading-public-syria/8YB75otYirPzUCnlwaVtcK/story.html

And according to W.V. Cole, the media could also use some tidying-up magic with regard to reporting religious affiliations.  "Christians have been committing war crimes all across the world for centuries now.  But does the press always identify the butchers as Christians?  Hardly."  Take Hitler, for example.  Do you ever see him always identified as a Christian even though he gave many speeches claiming to be one?  And are America's favorite perpetrators of war crimes (the Bush family, the Clintons, Reagan, Obama, etc.) always identified by the media as Christians too?  No, the MSM only identifies breaking-bad "Muslims" by their religion.  It's time for them to clean up their act. http://www.commondreams.org/views/2016/03/25/dear-media-radovan-karadzic-european-christian

Kondo recommends that we tidy up one category at a time, starting with our clothes.  That works for me.  Let's start by getting rid of all those wolves in sheep's clothing in Washington who are responsible for making the Middle East the unlivable mess that it is today.

"Japanese organizational consultant Marie Kondo takes tidying to a whole new level, promising that if you properly declutter your home once, you'll never have to do it again."  America is our home and it desperately needs some emergency decluttering right now!  Perhaps Bernie Sanders can do it.  Perhaps not.  But Trump and Clinton definitely can't.  Neither one seems to know how to organize their own drawers let alone America's.

And then after our country has finally gotten tidied up once and for all and we've carefully put all those giant corporations, lobbyists, election manipulators and weapons manufacturers out on the sidewalk in garbage bags where they belong, then hopefully America can go back to being a tidy democracy again.  But only after that happens can we start the life-changing magic of tidying up the Middle East too.  http://www.globalresearch.ca/syria-aleppos-black-box-is-found-under-the-rubble-of-propaganda/5516288

First things we need to do to get the Middle East tidied up?  Put all the Pentagon's war toys away.  Put the Israeli neo-colonialists' brutal occupation and "settlements" out with the trash.  Get rid of General Sisi in Egypt.  Call the Salvation Army to come pick up the House of Saud.  And take all those trillion-dollar American airbases, contractors, spies, fleets, missiles, drones, tanks, etc. back home and throw them in the trash too.  Job well done!

And after we have tidied up and decluttered all that humongous Wall Street and War Street litter both here and abroad, our lives here in America too will be magically changed -- for the better.

If I can declutter and tidy up my own messy apartment, then there is definitely hope for the rest of the world.
Posted by Jane Stillwater at 8:13 AM