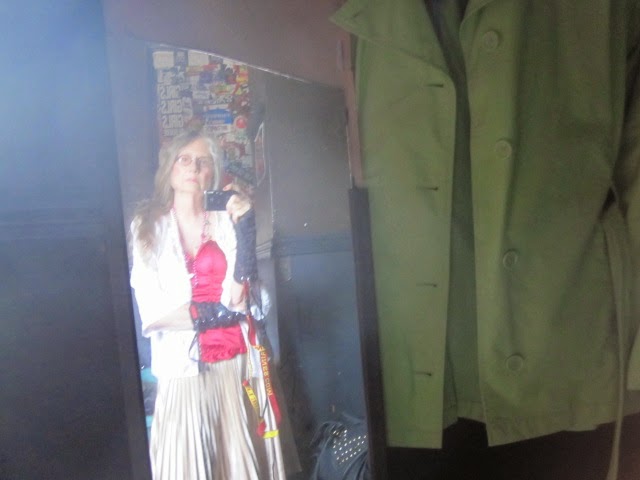 Madame Jane predicts: Things are gonna to get worse, much worse
My neighbor Madame Jane is not only the world's most accurate fortune-teller, she is also the most completely-ignored fortune-teller since the beginning of time -- except perhaps for Cassandra.  And there is a good reason for this too.  Frankly, Madame Jane is just plain morose.  Nobody wants to be told bad news constantly -- even if it is true.  Even I am getting tired of being haunted by Madame Jane's sad tales of gloom and doom.  And I've told her this time and again.       But, suddenly, at 6:00 am this morning, there was Madame Jane again, at my front door, banging fiercely away with her fists and shouting,  "You need to wake up, dearie.  Wake up!  And it's time for the whole world to wake up too!"     "Well, the whole world is going to have to wait," I yelled back, "until after I've brushed my teeth."  Plus I'd just finished reading a book called "Fun Is Good" -- and Madame Jane is definitely not fun.      But M.J. was having none of it.  "Things are never going to get better in America," she yelled through the door.  "I have just returned from the future.  Things are only going to get worse.  And right now the only hope of changing this grim future is to band all Americans together as allies, working together in common cause."

Read my lips.  "I. Don't. Care."        "We need to stop anyone who tries to teach Americans to hate each other.  We need to turn off all those attack-ads on TV -- and then fight desperately like wolves in a pack so that, in the future, things perhaps might possibly remain the same as they are now and not get any worse."
Madame Jane took a deep breath and adjusted her wig.

Then Madame Jane started to glare at me again -- with those fierce and ancient dark gypsy eyes of hers.  "And what exactly are you going to do to stop all this?" she snarled.       "Er, uh, sign a petition on the internet to save the dolphins?"

PS:  I'm currently reading a book called "Social," and the author claims that when our brains aren't doing anything else, their default setting is to think about our interactions with others.  That's amazing.  "After Christianity and Islam," says the author, "Facebook is the third largest organization in the world," because people just wanna be friends.

Hey, maybe Madame Jane can get on FB and then convince all our friendly brains to help save the world.  Why not -- if being BFFs with seven billion other people would give our brains something creative to do.  After all, blowing people up and hoarding money are social activities that suck eggs.

If social interaction actually is the most important thing in the world for our brains, then the Pentagon and banksters are going about things all wrong.
http://news.yahoo.com/assads-warnings-start-ring-true-turkey-144516592.html

And this could also explain the behavior of  ISIS.  Because its members never really learned the niceties of genuine social interaction because they weren't raised around women, the queens of social interaction and hot gossip, they never learned any real social skills.  So apparently they think that beheading people is the best way to win friends and influence people?  You guys are just gross!*****Footnotes about Iraq and Syria:

U.S. Embassy in Ankara Headquarter for ISIS War on Iraq – Hariri Insider http://nsnbc.me/2014/06/22/u-s-embassy-in-ankara-headquarter-for-isis-war-on-iraq-hariri-insider/     "Listening to the chorus of statements insisting that the US has no responsibility for the deepening tragedy inflicted upon the people of Iraq and Libya, one is reminded of nothing so much as the Nazi war criminals at Nuremberg, from Hermann Göring on down, rising one-by-one in the dock to declare themselves 'not guilty.'     "As the contradictions and deceptions of Washington’s policy become ever more glaring, US officials simply act as though the American people won’t notice, or will believe anything."  http://www.wsws.org/en/articles/2014/06/30/pers-j30.html     "Abu Bakr Muhammad Maqdisi in this book has taken the same policy of Genghis Khan, thanks God they didn’t claim they derived their policies from prophet Muhammad, because God said: ‘There has certainly been for you in the Messenger of Allah an excellent pattern for anyone whose hope is in Allah and the Last Day and [who] remembers Allah often.’ [Quran 33:21].  So their ‘excellent pattern’ was Genghis Khan.

"Genghis Khan used to enter a village and annihilates all living in it, even animals he’d slaughter it, and burn down the houses, so the next village hears that Genghis Khan is coming they flee away and this is what ISIS is doing in Iraq, and what’s the goal of ISIS?  When ISIS entered Samerra they killed a thousand Sunni, and now killing Shiites, and this is the American policy.


"Henry Kissinger wrote a memo in 1982 or 1984, don’t remember exactly, it’s titled The 100 Years War.  When asked where this 100 years war will occur?  He said in the Middle East when we ignite the war between the Sunnah and the Shiites."  http://www.informationclearinghouse.info/article39005.htm

....This is a stunning admission, hardly picked up in the Western media. Washington is confirming that there is no such thing as a moderate rebel force in Syria. But what Washington and its fellow state terrorist sponsors are doing is throwing $500 million into a project of creating the semblance of "a credible field force". This creation will then give Western powers and its Arab allies a legitimacy to escalate their criminal covert war for regime change in Syria.


No wonder Obama warned his war council in Washington that this would be a "long campaign". For the arsonists have become the fireman, the poachers have become gamekeepers, and the deluded have become the therapists.
http://www.informationclearinghouse.info/article40005.htm