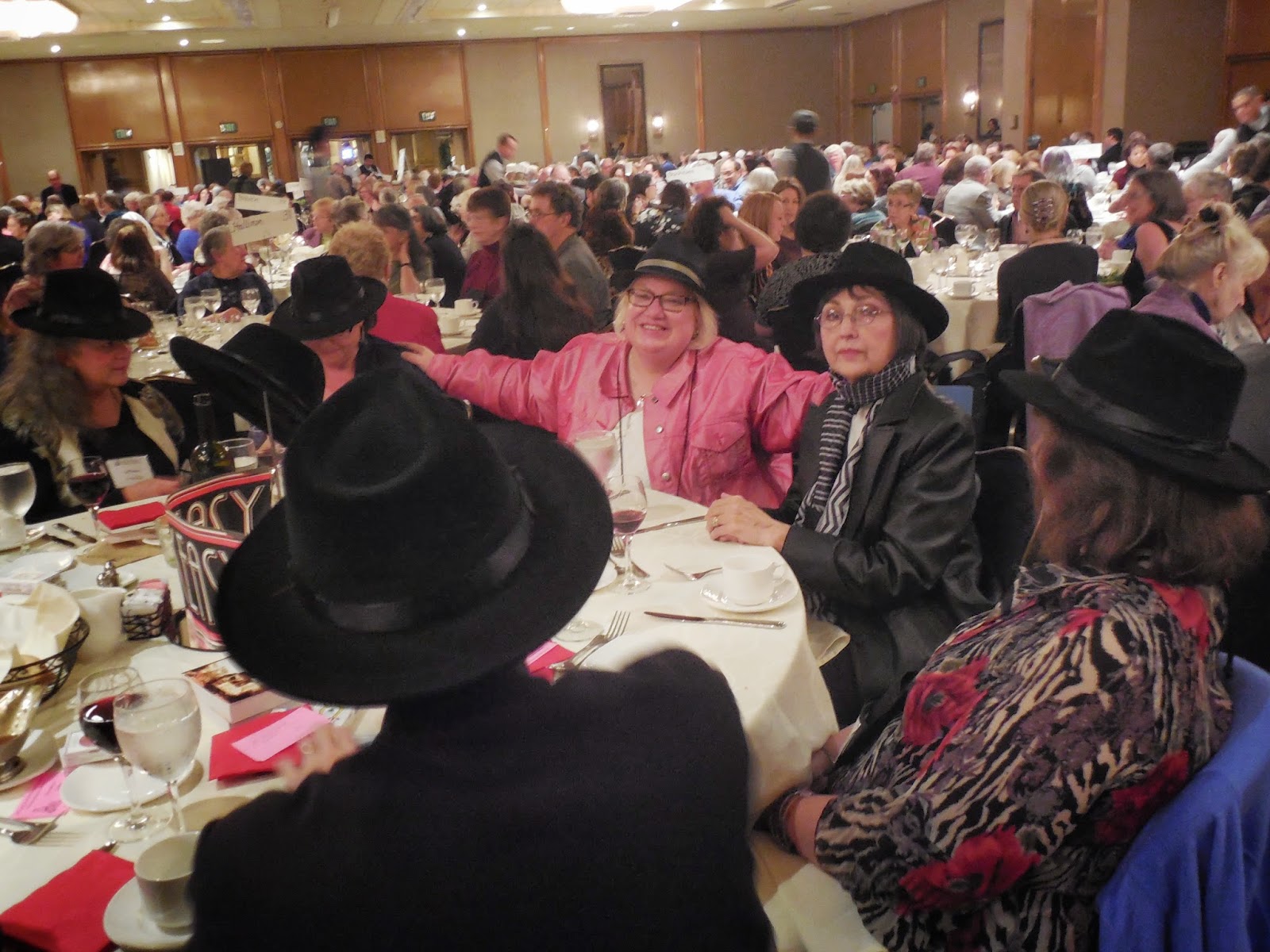 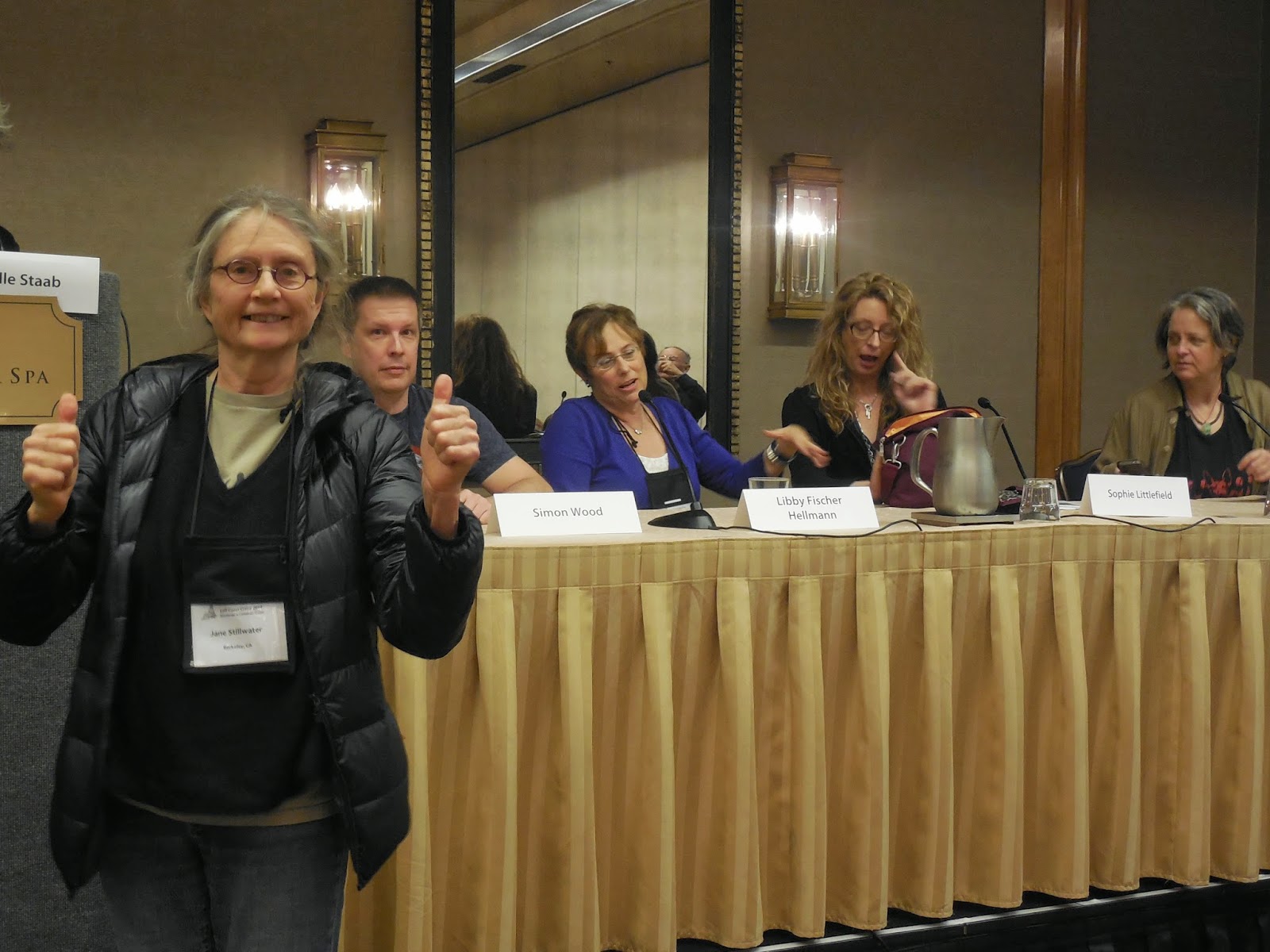 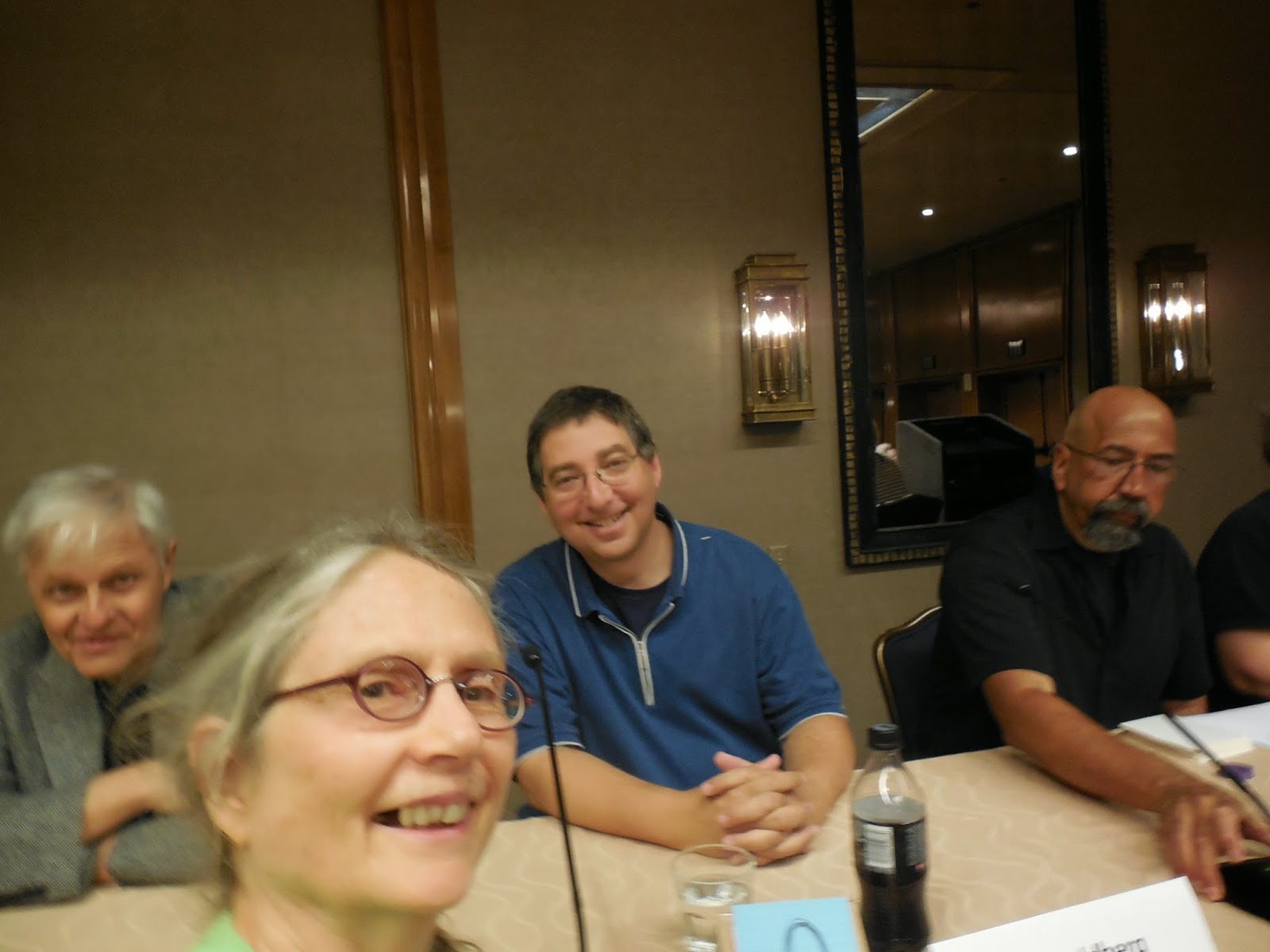 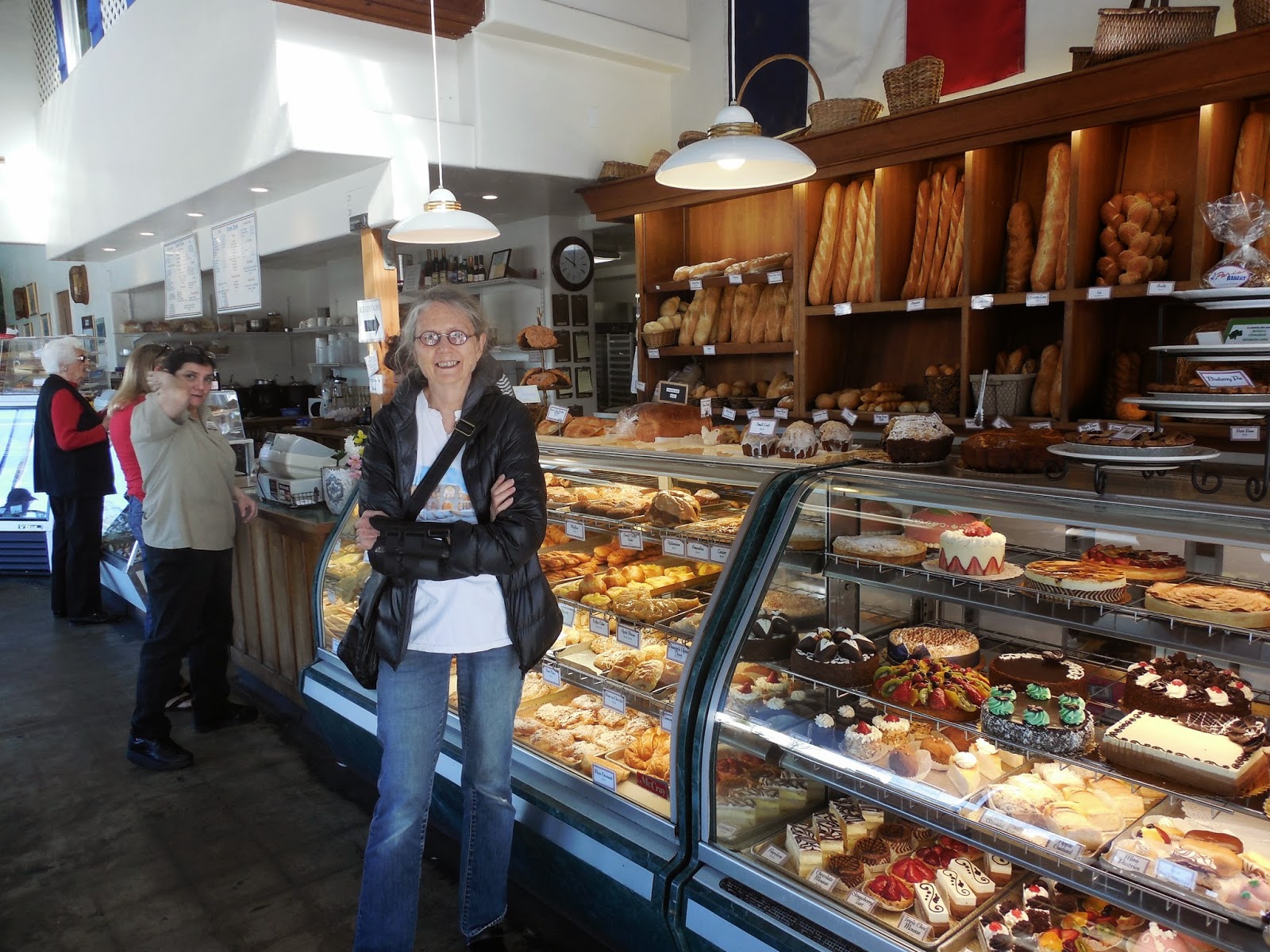 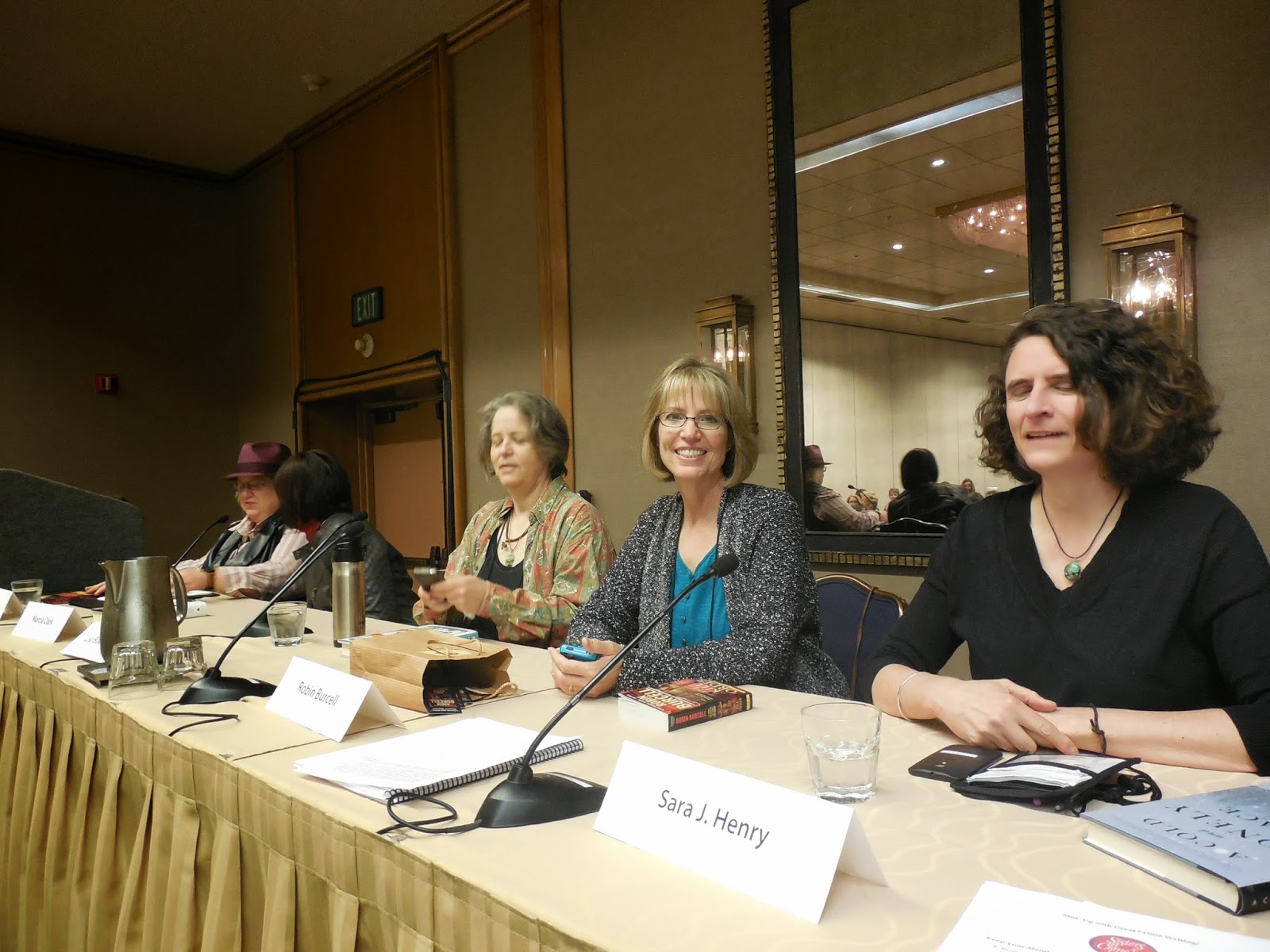 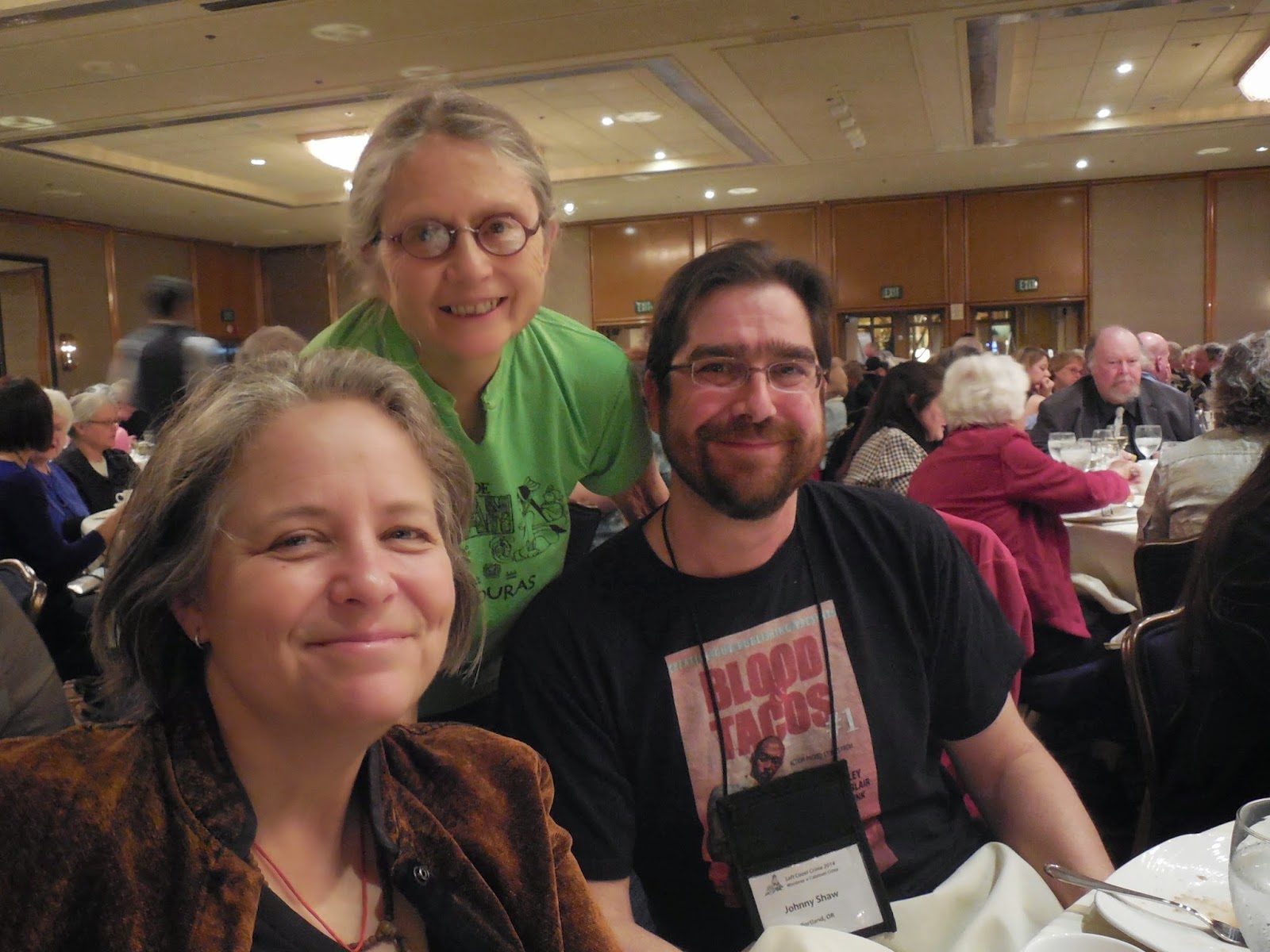 At the LLC murder-mystery convention: Nobody's mentioned Flight 370 so far...
While driving to a murder-mystery writers' and readers' convention in Monterey, CA the other day, I stopped by Silicon Valley to have lunch with my old college sweetheart.  Good grief!  How come I have aged so much and he hasn't?  That's totally not fair.  http://www.leftcoastcrime.org/2014/
A friend of mine in Germany had emailed me that I absolutely, positively had to visit the Paris Bakery while I was in Monterey http://parisbakery.us/.  Which I did.  And got hooked.  So much for my gluten-free diet.  It's clear that I'm gonna pay a steep price for this discrepancy when I get home.  But not now!  Too many eclairs, croissants and napoleons to sample.  Greed triumphs over common sense.  Again.
Once actually at the convention, I immediately scored my 40 pounds of free books.  First things first.  Greed again.  Who would have thought that I was such a hoarder.  But apparently I am.  Who can possibly read three murder mysteries per day for a year?  That's just plain greedy.  It's like how the U.S. military collects all those countries, weapons and bombs.  Hoarding.  Just plain greed.  Except that you can't blow up cities and kill babies with books.

But how can I possibly begin to describe this convention?  All kinds of fabulous authors spoke.  And in between sessions, I ran off to the movies and saw "Omar" (you just gotta see it!), the Grand Budapest Hotel (laughed my socks off) and "Tim's Vermeer (very interesting of course but I dozed off for a few minutes half way through -- it was PBS on steroids).
My favorite authors speaking here were Lisa Brackmann, Johnny Shaw, Louise Penny, Cara Black, Brad Parks, Laurie R. King, Terry Shames, Rhys Bowen, Lee Goldberg, Sue Grafton, Sophie Littlefield, Simon Wood, Doc Macomber, Robert Kroese, Kelli Stanley.... Oh hell, they were all my favorites.  http://www.lisabrackmann.com/books/rock-paper-tiger/
Except that Janet Evanovich wasn't there.
And all of these fabulous authors gave talks and/or spoke on panels.  But not even one of them mentioned the strange mystery of the disappearance of Malaysia Airlines 370 -- or why it went down in the southern Indian Ocean instead of landing safely in Beijing -- closer to Diego Garcia than to Peking duck.  That's a hecka long way to be off course.
Anyway, my main take-away from the first day of the conference did solve one big mystery for me -- why in the world do I like crime-fiction novels so much?  At a panel discussing murder mysteries and social justice, one author stated that, "I never write about anything that involves social justice.  My books are just straight crime novels."  Which caused a light bulb to turn on in my brain.
"Every single murder mystery ever written is always solely about social justice -- or even just plain justice itself," I replied during the Q&A.  "They all have to do with bringing killers to justice.  And in every single one of these books, justice is always obtained."  No wonder I like murder mysteries.  I am such a big fan of Justice -- with a capital J.  If only we could track down all those evil killers on the national and international political scene as successfully as Sherlock Holmes or Aimee LeDuc or Kinsey Millhone or Ellie McEnroe tracked down their bad guys.
But it's all a matter of transparency.  In crime-fiction novels, transparency is always achieved eventually.  But in the covert world of the CIA, the Pentagon, NSA, Washington and Wall Street, transparency sucks eggs.
And the greatest murder-mysteries of our day -- deadly climate change, sleazy bankster fraud, Monsanto's silent-but-deadly GMOs, unconscionable War Street attacks on the Middle East and the creepy neo-Nazi corporatists' takeover of our government -- may never be solved.  Until it's too late, that is.  "Oh, now we know who-done-it!" we will all cry out -- cry out from our graves.

PS:  Meanwhile, back at the Paris Bakery, there are even more important mysteries to be solved.  Should I have almond croissants or eclairs for breakfast?  Or that round thingie over there with all that whipped cream?

If anyone ever wants to hire me on as a travel writer (or war correspondent), "Have laptop, will travel!"  And I would really like to go back to Iraq to see how things are now.  Or to Timbuktu.  Never been there.  Or Ukraine or Syria -- or Oklahoma, Hawaii or Milwaukee.  Never been there either.  But can't afford to go on my own.

"Life is a competition. The winners are the ones who do the most good deeds." You can also buy T-shirts, coffee mugs, tote bags, truckers' caps, baby gear and/or teddy bears with this logo printed on them. They make great gifts, especially for those of us who are still idealists in these troubled times. To purchase, just click here: http://www.cafepress.com/StillTWaters
Posted by Jane Stillwater at 10:30 AM