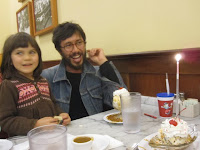 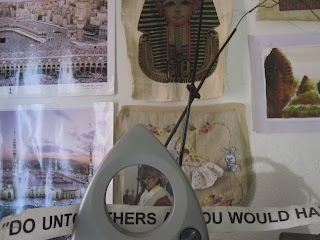 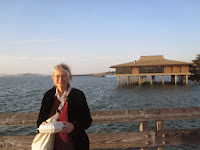 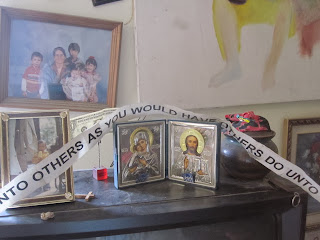 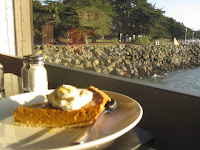 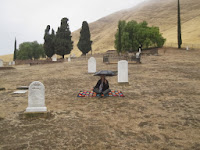 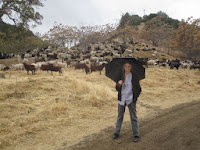 Do unto Syria as you would have Syria do unto you
While walking through the streets of San Francisco the other day and totally admiring this beautiful city's "painted lady" architectural glory, I suddenly and inexplicably started wondering what this amazing place might look like if it too had been bombed all to crap in the same manner that Damascus has been bombed to all to crap by all those missiles and cluster-bombs and Al Qaeda operatives that American taxpayers are paying for -- as they happily torture, rape and/or maim women and children in our name.
And this sudden unexpected vision of beautiful San Francisco as a bombed-out ruin has even further strengthened my resolve to do everything that I can to prevent America's ruthless War Street from spending our money on bombing other countries -- lest something like this happens to our beloved San Francisco too.  Or to my own beloved Berkeley.

We need to stop all this expensive, bloody and worthless slaughter and seriously consider a far, far better alternative instead: "Do unto Syria what we would have Syria do unto us."

And let's also consider what corporate America's current utter lack of a "Do unto Africa as we would have Africa do unto us" policy would do to us here if it also was reversed?  Can you even imagine what it would be like in America if what happens in Africa today daily was happening here too?  Really?  Would we Americans love to be perpetually in debt to the world bank, have our lands and resources seized by neo-colonialists, our crops polluted with GMOs, millions of our women and children raped and killed, and our pristine forests turned into a dumping ground for nuclear and industrial waste?  Hardly.  http://www.youtube.com/watch?v=yydDBl_UlpQ&feature=youtu.be

And while we're at it, let's also "Do unto Israel as we would have Israel do unto us."  America's relationship to Israel right now sucks eggs for the Israelis.  And what exactly is this relationship?  It might be easier to understand if we look at it from a different perspective and if our roles were reversed.

Imagine, for instance, that some huge gonzo super-power on the other side of the world was pumping billions and billions and billions of dollars into America's economy annually -- but with only one stipulation:  That all this gigantic wad of free Moola can only be used for one purpose:  To kill, torture, maim and and jail Native Americans.  And steal their land.  And establish an American Gestapo defense force and fund SSettlers to take over what few Indian reservations we have left (after 19 million Native Americans have already been slaughtered here already), and to treat native Americans like animals and to napalm their children.  And to do this all in the name of God.  https://www.youtube.com/watch?v=gTrbVf6SrCc

Would we, as Native Americans -- or even as just plain American citizens -- see the cruelty and injustice in this?  Or would we just sell out to all those big bucks thrown our way like the Israelis have; and just relax and glorify in the joy of having a vampire-like power over others who are completely at our mercy?

These same choices are the ones that America's War Street is forcing Israelis to make every day.  And so far, most Israelis seem to have chosen blood-money over the Ten Commandments.  What a waste.

And also let's consider another new perspective:  "Do unto nature and the environment what we would have nature and the environment do unto us."  Always remember that Nature bats last.  Think Fukushima.  Think a thousand more hurricanes like Sandy, Haiyan and Katrina.  More fracking earthquakes.  More 140-degree days.  "Admiral Samuel J. Locklear III, the commander of the United States Pacific Command, [stated] that global climate change was the greatest threat the United States faced — more dangerous than terrorism, Chinese hackers and North Korean nuclear missiles."  http://opinionator.blogs.nytimes.com/2013/11/10/learning-how-to-die-in-the-anthropocene/?src=recg&amp;_r=3&amp;

And America's War Street and Wall Street and related skin-flint tax-dodging huge corporations are obviously not clear on the concept of "Do unto Americans as you would have Americans do unto you" either.

In the 1940s, every American sacrificed their comfort and rationed their goods and went without in order to pay for the "Good War".

But ever since that stupid and useless invasion of Afghanistan in 2001, 99% of Americans are sacrificing and going without in order to pay for some stupid and useless "Endless War" that in no way benefits them -- while America's top one percent make no sacrifices at all; dining on caviar, buying cruise-ship-sized yachts with their bloody "war" profits and fiddling like Nero. http://readersupportednews.org/opinion2/277-75/20603-business-elites-are-waging-brutal-class-war-in-america.

And yet most Americans these days do nothing to protect themselves from being cheated, robbed and exploited, but rather spend their last decaying days as citizens of a formerly economically-viable democracy happily watching pseudo-myths and fables on Fox News -- as our beloved country slowly slips into third-world status.  "Welcome to Jakarta."  http://www.counterpunch.org/2013/11/22/chilean-socialism-1-indonesian-fascism-0/

Are we finally getting the Big Picture here yet -- that what goes around comes around?  If Americans continue to let Wall Street and War Street run our domestic policies, our foreign policies and our environmental policies, then all we can ever expect to receive is blood and carnage in return.

"The Bible tells us so."

PS:  Denmark, a country generally known to be a socialist/commie anti-war environmentally-conscious female-honoring democratic single-payer Tea-Party nightmare, has just been declared "The Happiest Country on Earth".  However, you will find no countries at all that are currently under the sway of corporate America at the top of this Happy List -- not even America itself.   And definitely not any countries that corporate War Street has invaded in the last 40 years!  http://www.huffingtonpost.com/2013/10/22/denmark-happiest-country_n_4070761.html

But changing from one economic system such as America's current Corporate Welfare state to another such as Denmark's economic democracy is clearly not going to help us either http://www.truth-out.org/opinion/item/20254-meet-americas-biggest-welfare-queens.  We need to make even bigger changes, and go from using any economic system for judging our success and failure -- to utilizing a philosophical system instead, one such as "Do unto others..."

"Life is a competition. The winners are the ones who do the most good deeds." You can also buy T-shirts, coffee mugs, tote bags, truckers' caps, baby gear and/or teddy bears with this logo printed on them. They make great gifts, especially for those of us who are still idealists in these troubled times. To purchase, just click here: http://www.cafepress.com/StillTWaters
Posted by Jane Stillwater at 8:32 PM