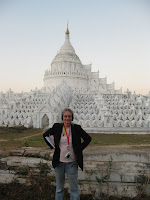 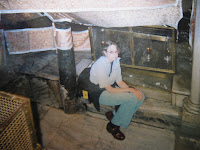 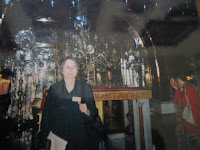 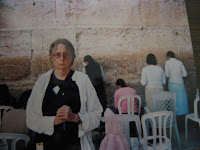 Gaza or bust: Hey, that's my Promised Land too!

Author's note: For years and years now, it's been really hard for me to write anything in favor of Palestinians because there are always so many repercussions. Sure, I don't receive death threats any more like I used to but there are still all those nasty e-mails to deal with. Bummer. Why bother? Why should I stick my cyber-neck out again and again for people who are living way over on the other side of the world? There are too many injustices here at home for me to object to. Why bother looking for them elsewhere?

But now I've just learned that Dr. Mazin Qumsiyeh, a former Associate Professor of Genetics, director of Clinical Cytogenetic services at Yale University School of Medicine and a professor at Bethlehem University (and also a Palestinian Christian), was just arrested by Israeli occupation forces for peacefully protesting land seizures and home demolitions in the West Bank near Bethlehem.

And you can just bet that if someone who has been a professor at the prestigious Yale School of Medicine can get arrested for standing up for justice, then who can guarantee that anyone else is safe from arrest -- either in the occupied West Bank or even here in America, the country that basically pays for the West Bank's occupation.

So I decided to go ahead and post my latest blog essay on Palestine anyway. Screw the weirdos who send me threatening e-mails. A person's gotta do what a person's gotta do. Justice is on my side!

Gaza or bust: Hey, that's my Promised Land too!

I'm all scheduled to go see Barbara Streisand and John Gresham at the 2010 Book Expo in New York City on May 25. This is a terrible thing. Rats!

"And why, exactly, are you complaining about that?" you might ask. "Seriously, Jane. There are a whole bunch of people out there who would give their right eye-tooth to be able to see Barbara Streisand live and in person!" And I might even be one of them -- but my big problem is that now I've just developed a disasterous scheduling conflict.

"Guess what, Jane?" e-mailed my friend Janet. "An extra place has just opened up on the European boat flotilla that's sailing from Greece to Gaza soon, and I think they can fit you in. You'd be leaving for Greece on May 19. Can you do it?" Rats and double-rats! This means that I'm going to have to chose between Barbra Streisand and taking a boat trip from Greece to Gaza, where people are trapped and dying. Gaza today is like how things used to be during World War II. Everyone there is either busy reenacting the results of Nazis' siege of the Warsaw Ghetto or else the Nazis' siege of Dunkirk -- only without all those little English sailboats to the rescue, except, hopefully, for this new European Flotilla.

Plus this flotilla will set sail on the 70th anniversary of the relief of the siege of Dunkirk. How historic is that!

Who could possibly make a choice between Barbra Streisand and and the relief of Gaza? Not me!

So. What should I do??? Should I be getting my freak on with Barbra? Or is it time to go off to Gaza, fight against injustice, get a hot scoop for my blog -- and get a once-in-a-lifetime chance to regenerate my Muslim roots as well?

One of my pet peeves in life these days is when people keep sanctimoniously telling me what I can and cannot do. "Jane, you need to start going along with the crowd more," they say. That's not gonna happen. I'm too old for that.

Heck, I'm even afraid to even hint gently that perhaps -- just perhaps -- I might be a Muslim too. Why? Because whenever I do mention that fact, then people start pouring out of the freaking WOODWORK in order to call me a baby-killer or a communist or a terrorist or Lord-knows-what other kind of social or political leper. Well. Despite all this pressure to conform, every once in a while I become contrary enough to want to flaunt my Muslim-ish-ness -- if for no other reason than to remind myself that I'm not just one more mindless Teabagger sheep.

Not only that, but the various fundie wingnuts who now run the Israeli government with an iron hand are always ranting and raving on about wanting to seize what small bits of land that are now left to Palestinians in the West Bank and East Jerusalem and Old Jerusalem -- and how these small bits and pieces now lived on by Palestinians need to be absorbed into the Israeli wingnuts' Promised Land too.

I hate to burst your bubble, guys, but, as a Muslim, that area you are trying to grab up is actually MY Promised Land. That's MY property you're talking about. Your claim to that particular patch of real estate has been invalidated by a more recent deed to the property. Doesn't anybody around here ever read the Talmud, the Bible or the Quran?

As a Muslim, my deed to the Promised Land is newer than the Israeli wingnuts' deed. My deed was written later. And any real estate broker will tell you that a newer deed always holds precedence. And that means that my deed to all this section of the Promised Land trumps theirs. Get over it.

Not only that but Old Jerusalem is a UNESCO World Heritage Site -- MY world heritage site. As a member of the United Nations, I get possession of Old Jerusalem too. You think not? Read the fine print.

So. Should I go over to Gaza and set everyone over there straight -- or should I just go see Barbra Streisand instead? I'm completely torn. What would YOU do?

PS: Someone from the Free Palestine Movement recently suggested the perfect solution to my dilemma. "All you have to do is just ask Barbra Streisand to come on the boat flotilla to Gaza with you." Works for me.

PPS: And while we're on the subject of Teabaggers and wingnuts, the wingnuts in Arizona all have a lot in common with Israel's wingnuts. First of all, both are in control of governments that have enacted laws that clearly support violence, intimidation and racism over democracy and the right of all human beings to be free.

Second, Palestinians owned the West Bank, Gaza, East Jerusalem and Old Jerusalem before the Israelis arrived -- and Mexicans owned Arizona before the Americans arrived. Both Americans and Israelis then seized possession of "disputed" territories by force. And now both American and Israeli wingnuts are all complaining and whining because the people that they originally seized all this land from still want it back.

Third, both the Israeli wingnuts and the Arizona wingnuts use false rhetoric to bolster their claims. If you disagree with Teabagger wingnuts, they won't argue the facts with you but rather will simply call you names -- claim that you are un-American or, shudder, socialist or whatever.

And if you disagree with the Israeli wingnuts, they will simply call you antisemitic. End of discussion. Well, here's what I've got to say about that. "If the wingnuts, fundies and Mossad agents who currently run the Israeli government want to stop whining about the rise of antisemitism, then they had better stop acting in ways that endanger their reputations and actually encourage antisemitism. They had better stop acting like murderers and liars. Nobody likes a murderer or a liar, no matter what religion they profess -- be they Jews, Christians or Muslims. And lying and murdering with impunity in the Holy Land is giving Judaism a very bad name."

I would hate to see Jews worldwide become shunned and avoided solely because of the tricks that Netanyahu's wingnuts are up to. Plus don't you just hate it when hypocrites whine?

It's like when Sarah Palin advocates hunting wolves from helicopters and then whines about being slurred by environmentalists. Or when Palin goes to Arizona, stirs up a shipload of racism and then whines that she is being misunderstood by the press.

It's like when Bush and Cheney claimed to be goody-goody Christians and then set off a firestorm that eventually killed over a million people in the Middle East -- and then Bush and Cheney started whining that we Americans who advocated for peace were acting anti-Christian.

It's like when the Taliban burned down all those girls' schools in Afghanistan and then whined about Americans all being anti-Muslim when we objected.

You can't have it both ways, guys. Either you always take the moral high ground no matter what the cost -- or you don't. You can't just PRETEND to take the moral high ground. People have a way of eventually finding out the truth. Plus being able to master the art of being fair, moral and just, even if it kills you, is what separates human being from animals. And it is also the goal of ALL of our religions.

PPPS: And, no, I'm still not done venting about religious hypocrisy. Here are even more ventilations from me:

Just because some idiot Saudis may or may not have blown up the World Trade Center, I'm supposed to hate all Muslims? That doesn't make sense.

Just because some idiots in Israel blew up Jenin, Nablus, Lebanon (twice), Gaza and parts of Bethlehem, I'm supposed to hate all Jews? That doesn't make sense.

And just because some idiots in Washington who claim to listen to Jesus blew up Iraq and Afghanistan, I'm supposed to hate all Christians? That doesn't make sense either.

PPPPS: And while I'm still in tell-all mode, I might as well confess that I am even more of a pariah than just being a good Muslim in a time when all too many Americans consider Muslims to be terrorists. I am also a good Jew, a good Christian, a good Buddhist and probably even a good Hindu -- I take yoga one a week!

But what aggravates me most about Americans today is that, even after our great country has flourished and bloomed for the past 200 years under democracy and religious freedom, when the going starts to get tough for this generation all too many of us ignore both democracy and religion completely -- and turn to fascism.

Please vote for me so that I can get a scholarship to the Netroots Nation convention in Las Vegas this July! Vote here: http://www.democracyforamerica.com/netroots_nation_scholarships/810-jane-stillwater

Posted by Jane Stillwater at 8:47 AM