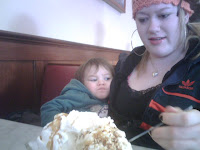 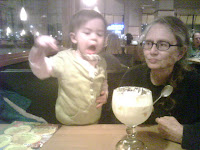 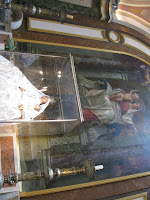 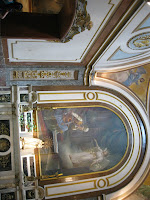 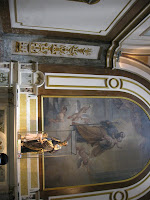 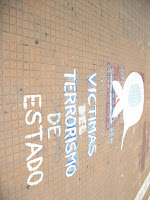 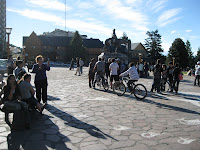 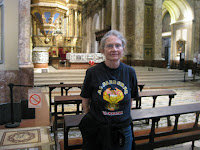 The cathedrals of South America: Breaking the parent-child bond...
While in South America this month, I first visited the main cathedral in Santiago, Chile, and then I saw the main cathedral in Buenos Aires, Argentina. They were both highly lovely. And they both featured a multitude of paintings, murals and statues that glorified the strong physical and emotional bond that exists between adults and children. There were many statues depicting St. Mary nurturing and protecting the baby Jesus. Then there was St. Christopher, helping the young Jesus to safely cross a river. And of course there was St. Anthony. And I forget who all else. In the Buenos Aires cathedral especially, almost every icon there emphasized and illuminated the loving and protective nature of this strong protective adult-child bond.
There was also a bunch of artwork portraying the protective and nurturing bond that is supposed to exist between God the Son and all the rest of us poor lost sheep, God's children.
The artwork in both churches made this very meaningful, holy and protective relationship absolutely jump out at me. "Adults are SUPPOSED to protect and nurture children," these statues practically screamed. "There is a sacred and profound nature that exists within the parent-child bond."
And face it, guys. The archetype of a benevolent god is based on the protective nature of adults toward children.
I bet that you know what is coming up next, right? The world's adults today are NOT doing a good job of protecting their children. Napalm, white phosphorus, drones, Shock and Awe, child pornography, "spare the rod and spoil the child," child prostitution, child slavery, child molestation, children soldiers, you name it. "How could ANYONE stoop so low as to hurt a child?" you might ask. And yet children's trust in their adult protectors is violated daily and routinely at least a million times a day. Nothing justifies that. End of lecture.
Another thing about Chile and Argentina that almost blew my mind is that both countries used to be democracies and then both countries were seized by brutal dictatorships -- dictatorships that involved torture, death squads, disappearances, concentration camps, assassinations and all that other messy stuff. Full-out dictatorships. No holds barred. CIA "advisors" in the background. Knocks on the door at midnight. Krystallnachts. Cattle prods. The whole nine yards.
And yet today both Chile and Argentina are democracies again. Go figure. It gives one pause. Perhaps this means that if the USA is ever taken over by dictators too, then we too might be able to find our way back. And I'm even going to go out on a limb here and suggest that had America and Britain not battled Hitler to the teeth, then sooner or later the German people would have given him the boot too. Look what happened in the Soviet Union. Eventually people do tend to speak up.
Maybe there is hope for the human race yet.
And maybe, just maybe, adults and governments will finally stop creating "collateral damage" that involves barbecuing babies -- like what has happened or is still happening in places like Auschwitz, Rwanda, Baghdad and Gaza.
Posted by Jane Stillwater at 11:33 AM