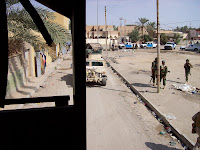 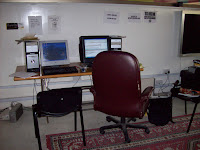 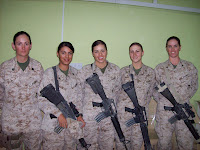 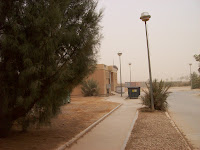 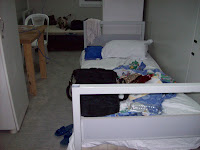 Our troops: Still slogging through the "Long War" in Iraq....

(Photos are of the press room in the Green Zone, female Marines, scenic downtown Hit, an internet cafe in Anbar and a room at the Al Asad Hotel)

For the past several years I've been receiving between five and ten MNFI (Multi-National Forces Iraq) press releases in my inbox every day, sent from places like Camp Victory and Camp Falcon and the Green Zone in Iraq. I get them every single day, rain or shine, weekends and holidays included. You just gotta admire the tenacity of the MNFI public affairs office press rooms. They are really really trying really really hard to put a face on this war.

Here are some examples from today's list of press releases:

"Leaders discuss new change for Sons of Iraq in Diyala."

And all these press releases continue to slog into my inbox, day after day -- year after year. I've only printed out the titles to just a few of them here, but reading through all this constant flood of press releases every day really gives me a feeling of the intensity of our military's commitment to doing their job right over in Iraq. I have over 500 of these releases. Every single day I get at least five. Our troops are on the job in Iraq -- bigtime. They are working overtime over there, pouring their hearts out. And they have been moving heaven and earth to perform their jobs well continually for the last five years.

Now isn't it time that we brought them all home?

WHAT: The Iraqi Tourism Board wishes to invite all local and international media to a press conference to discuss future plans and investment opportunities of Jazirat AI A'ras, also known as Jazirat Janain, a romantic island in the heart of historic Baghdad, on the Tigris River.

I wish I had been able to go to that press conference. Maybe I coulda gotten some hot new material for my book-in-progress, "Iraq, Iran & North Korea: From Axis of Evil to Hot New Tourist Destinations". The chapters on Iran and North Korea are already written -- and now all I need to do is visit the pilgrim sites of Najaf, see some of Iraq's charming antiquities sites, stay in the Kurdish version of a five-star hotel and tour this new romantic island honeymoon destination on the Tirgris -- and, of course, try to find a publisher....

Posted by Jane Stillwater at 10:45 AM