Syria, Palestine & America: Are there worse things than death?
Do you look forward to dying?  Almost nobody does.  Here in America they call it "passing away".  That's just chicken-shite.  Death is death.  You pass a math test.  You pass cars on the freeway.  But when you die, you are dead.
Palestinians know this.  They've watched so many people die that they even have a name for it.  "Genocide."  And yet, even after 75 long miserable years, they still keep on dying rather than submit to a brutal occupation.  Why?  Because for them, death is better than living in chains.
And the same thing is true of Syrians.  Thousands upon thousands of them have died heroically in order to save their country from brutal invaders.  No one there wants to spend their days living in just another Gaza.  They don't want to live in chains either. 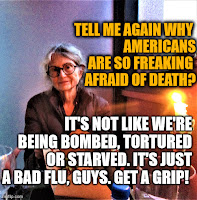 And now let's discuss the plight of Americans -- Americans who are neither being tortured, napalmed, imprisoned or starved.  And yet Americans are so afraid of dying that they actually voluntarily chain themselves up.
After almost 500 days of living in terror of a virus with a 0.07% kill rate and six different effective cures, one would think that Americans would be sick and tired of being enslaved by their own petty fears.  But no.

Ask yourself, "Why are Americans so afraid of dying -- even when they aren't even in any danger?"  I have no reasonable answer to that question.  Do you?

Almost everything we need to know about COV$D is contained in these videos now posted on Big Gee's Blog.  And guess what?  You won't find any of these videos on Google.  No big surprise there.  Censorship is rampant on the Web.   Sigh.  https://biggeesblog.cymru/

And last but not least, here's me singing an improvisational rap song on my 79th birthday. Go, me!

Posted by Jane Stillwater at 1:01 PM