What exactly is Obama-Trump-Biden's end game in Syria?  To murder every single man, woman and child in the Middle East?  Not a very laudable goal.  Not exactly what Thomas Jefferson had in mind when he wrote the Declaration of Independence.  Jefferson would have liked President Assad more than he would ever like Obama-Trump-Biden.  Me too.  Ten years of slaughtering Syrians is enough.  Stop it! 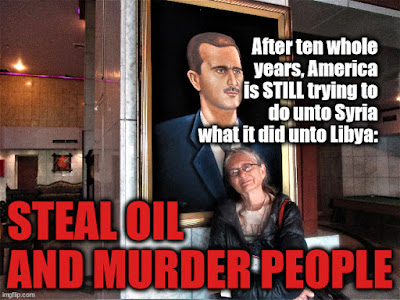 PS:  Now they are trying to murder us Americans too?  https://www.bitchute.com/video/fhhNpDM9Ahwf/?fbclid=IwAR3eH-VXZjjllR9wUQV-J1JzVibnWBia4Zw5fr0SNJ5dQopp4PJIm1AsvVY

And while we're at it, here's something else I have to say about all those experimental injections we hear about day and night.  Now the evening-news propaganda not only tries to persuade us that President Assad is a bad guy, but the evening news has also turned into one big fat commercial for Pfizer-Moderna-J&J.  Gross!  And they don't even include that fast-running voice-over whisper that lists all these injections' horrendous side effects either.

And let's stop all that garbage too.  How?  Don't get the freaking experimental injection! 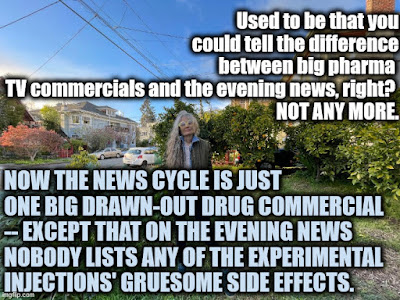 Stop Wall Street and War Street (and Big Pharma) from destroying our world.   And while you're at it, please buy my books.  https://www.amazon.com/Jane-Stillwater/e/B00IW6O1RM
Posted by Jane Stillwater at 6:42 AM