Even in your wildest dreams could you ever imagine that Americans would ever put up with allowing Houston, Texas, to go without electricity for almost a year after being hit by a hurricane?  "Inconceivable!"  And yet San Juan, Puerto Rico, another American city that was hit by a hurricane at the same time as Houston, STILL has very little electrical power -- and doesn't reasonably expect to get its electricity up and running before this summer either.  "Unheard of."

One American city had the necessary recovery funds pumped into it fast.  Lights went back on within days.  Another American city still sees its students studying by candlelight and living without refrigeration or air conditioning 24/7 -- even months and months after the event and also for many more months to come.  https://portside.org/2018-02-02/puerto-rico-living-and-learning-dark

If such a horrendous third-world un-American thing such as going without power for almost a year had happened to Houston, then I bet all y'all anything that within hours Colonel Travis himself would be rolling over in his grave and Texans would have succeeded from the Union or/or marched on Washington with torches and pitchforks!

And here's something else of interest about this sad tale of two cities -- that somehow Puerto Ricans are now being blamed for all the destruction caused by the same act of nature that Texans are NOT being blamed for -- that somehow Hurricane Maria was somehow the fault of those spendthrift Puerto Ricans and thus they deserve to suffer for their sins and to get no relief.  Yet Houston is blameless. 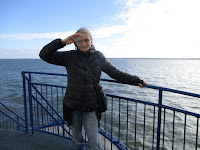 But then I talked with a friend of mine who had just returned from both San Juan and Houston -- and he reminded me that things were just not as simple as that.  "There are other factors," said my friend.  "In Puerto Rico, for instance, Hurricane Maria was so fierce that it almost flattened much of the island's infrastructure.  In Houston, on the other hand, the problem had more to do with flooding."

He then surprised me by saying that FEMA had actually been well-prepared ahead of time for the Puerto Rico hurricane and that, not like in New Orleans, FEMA had actually done a good job.  "FEMA arrived even before the hurricane hit, bringing tons of emergency food supplies which were then stored on ships docked in the port.  However, getting the supplies to the people who needed them was another story altogether.  The roads were a mess.  Electrical poles were down.  It was dangerous to drive trucks.  Distribution was a huge problem.  And another huge problem is that, although the US has pledged seven billion dollars to help Puerto Rico get back on its feet, more like 40 billion dollars is desperately needed.  There was unbelievable damage to the infrastructure."

With regard to corruption, my friend didn't know much about corruption in Houston -- but America has allowed corruption in Puerto Rico to go on for over a century, selectively applying the Rule of Law to help the powerful and well-off.

"One example of corruption in Puerto Rico," continued my friend, "is that the island's power company is making it almost impossible to install solar facilities because solar power would not benefit it.  And also power was restored to the wealthier part of San Juan while the rest of the island will be blacked out for many more months."

My own personal theory is that the only difference between corruption in Puerto Rico and corruption in Texas is that if someone wants to do something corrupt in Houston, he first makes it legal.

But Houston and San Juan do have one very important thing in common -- its wonderful people.  "In both places I saw people working together, neighbors helping less fortunate neighbors on a very person-to-person level.  In both cities, it was inspiring and humbling to watch."

PS:  And here's another sad tale from a third American city -- Washington DC.  Completely flooded by money-changers in the temple, it has now become a total disaster area, even more of a swamp than ever, drowning in whole hurricanes of corruption --  corruption that is now legal.

In a few days I myself am going to slog off to Washington DC and heroically wade through the catastrophic results of Hurricane K Street, attending both the March 2nd "Israel Lobby and American Policy" conference and also a rally against AIPAC (The American-Israel Public Affairs Committee) on March 4th.  See you there too?   http://israellobbyandamericanpolicy.org/  I'd give you more info on where the anti-AIPAC rally is going to be held, but Google doesn't list it.  No surprise there.

The New York Times keeps telling us that it was Hurricane Russia that interfered with the 2016 presidential election -- but to paraphrase America's colorful 36th president, "The Zionist-Saudi alliance has America's pecker in its pocket."  Hurricane AIPAC has been slamming into our elections full-force for the last 40-odd years.


Stop Wall Street and War Street from destroying our world.   And while you're at it, please buy my books.  https://www.amazon.com/Jane-Stillwater/e/B00IW6O1RM
Posted by Jane Stillwater at 4:38 PM