Disaster victim? Need help? Too bad for ya!

Here's a poem I just wrote:

Hurricanes, wildfires and floods -- oh my!
"Help Help Help!" you mournfully cry.
"You're on your own," our corporatized government replies.
"We gots other uses for your dollar supply."

Wait, what?  Exactly what other uses are our corporatized government talking about?  "Don't we pay out our hard-earned tax dollars so that our government will have enough money saved up to be able to help us out in emergencies like these -- sort of like paying into an insurance policy and then expecting a return?"  You might think that.  And you would be wrong.

Fire destroyed your home?  Obsessed gunmen shot up your kids?  Floods made a wreck of your new carpet?  Hurricanes stole your front porch?  Too bad for ya.  All your tax dollars have gone off to Wall Street and War Street.  None left for you.  Get over it.  www.workers.org/2017/10/10/why-u-s-and-saudi-arabia-back-rohingya-in-myanmar/

Currently, our tax dollars are going almost exclusively toward making America's billionaires even richer than they now are.  "Crazy Rich Americans."  Sorry, but you ain't never gonna get your hands on that $$$ again -- even though it was originally yours in the first place.  Trickle-up economics.  Sucks to be you.


And it sucks to be living in the Middle East too, BTW.  Americans now look on in horror at the brutal firestorms raging through NorCal.  And yet nightmare firestorms like these are an everyday occurrence in places like Iraq, Libya, Syria, Gaza, Ukraine, Afghanistan, etc. -- thanks to America's very own masters of "war".

PS:  I'm up here in Toronto at a convention of murder-mystery readers and writers.  But there's really no great mystery about who is murdering America's national budget.  See above.

PPS:  Toronto is the ultimate melting pot for all kinds of races, ethnicities and cultures.  "There are at least 120 languages spoken here," someone just told me.  I didn't even know that there even were 120 languages. 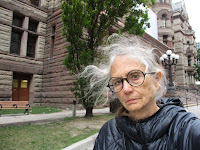 "And Toronto is one of the safest cities in the entire world."  Muslims on every street corner, Blacks and Asians everywhere you look -- as well as a hecka lot of White people.  And everyone gets along just fine.

And the police here don't need or want to dress up like Robocops and/or ride around in tanks.  And nobody here tries to blow up anything or shoot up stadiums or schools either.

So what's my point?  How come, after America spends so much money making "war" on so many countries on the other side of the globe, that somehow America's "wars" always seem to come home to roost in America?  Perhaps Canadians have a better idea.

Stop Wall Street and War Street from destroying our world.   And while you're at it, please buy my books -- thus helping me support my addiction to Justice and Truth.  https://www.amazon.com/Jane-Stillwater/e/B00IW6O1RM