Ozymandias & me: Lebanon, a crusader castle & The Abyss

When I was a kid, I always wanted to become an archaeologist and travel to the Middle East to see pyramids and such.  Well, I certainly have traveled to the Middle East alright.  But so far all I've seen there is war, war and more war.  Iraq, Saudi Arabia, Palestine, Syria, Afghanistan, Egypt and I forget where all else.  War has been going on in the Middle East for a whole bunch of years now.   And Western nations have been enthusiastically attacking the Middle East since way back in the day when Lawrence of Arabia was riding his camel through Hollywood.

But attacks by the West on the Fertile Crescent and its surrounds have not just been going on since the 20th century.  The Romans also went there.  So did all those medieval Crusaders.  And yet, so many centuries later, there's not much proof left from those times that the West had ever even been in the Middle East at all.

And many years from now, there probably won't be any proof left that Eisenhower, Reagan, Bush, Obama, NATO or Netanyahu had been there either.  Sorry, guys.

But recently I was lucky enough to see some real proof with my own eyes that actual medieval Crusaders had actually been in Lebanon nine centuries ago -- a wannabe archaeologist's dream come true.  I got to tour an old Crusaders' castle!  Wow, just wow. 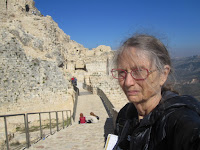 The whole castle was made of a quartz-like rock and practically glowed in the sunlight.  Quiet, windswept and lonely, set on top a hill, it was spooky-quiet there, almost like standing in an old-growth redwood forest -- that kind of silence, stillness and hush.  Just like Shelley's poem about Ozymandias, formerly known as the King of Kings.  "Round the decay of that colossal wreck, boundless and bare, the lone and level sands stretch far away."  Only it was hills with trees on them that were stretching far away.  http://news.bbc.co.uk/2/hi/middle_east/762297.stm

And from the top of the castle, you could look down at Israeli neo-colonialists' "settlements" -- stretching far away too.  I was that close to the Golan Heights.

Next I visited a place in southern Lebanon called "The Abyss," a completely different kind of military outpost.  This one was constructed back in 2006 when Israeli neo-colonialists, seeking to steal land in southern Lebanon, boldly invaded this area, totally confident that their overpowering Goliath-like military complex, one of the largest in the world, could take down some poorly-armed Davids in that region.  But boy was Goliath in for a big surprise.  He truly got his arse kicked.  http://mleeta.com/eng/materials/images.html 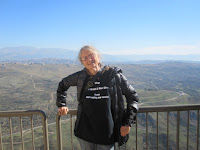 "When Ariel Sharon decided to invade Lebanon again, he thought that stealing our land would be like taking candy from a baby," said a former resistance fighter.  "But then Lebanese freedom fighters built tunnels under the hills and the resistance fought the Israeli invaders to a standstill, using only aging weapons from the 1960s and lots of heroism and grit.  70 Israeli tanks were disabled in a place now called 'The Abyss' and Sharon's troops were sent packing."

So Ariel Sharon wasn't exactly Ozymandias either.  And neither is Netanyahu, NATO, Britain and/or the American military-industrial complex.  It appears that Middle Easterners, even after over twenty centuries, are still sort of touchy about having their land invaded by the West.
Posted by Jane Stillwater at 10:40 AM