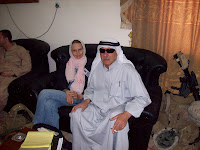 Pilgrims' progress?: Do Iraqis feel safe enough to go on Hajj this year?

When I was in Iraq last month, I came up with this brilliant idea for determining a barometer of just how stable the situation in Iraq is by checking out how many people actually felt safe and comfortable enough to attempt to go on Hajj this year.

For those of you who are asking yourselves, "What in the world is Hajj?" it is a holy pilgrimage to the city of Mecca at a certain time each year wherein perspective Hajjis follow the footsteps of the Prophet Mohammed (PBUH) by circling around the Kaabah, spending a day on the Plain of Arafat, spending a night at Muzdalifah, camping out at Mina and throwing stones at the devil at the Jammarat. To be considered a Hajji or a Hajja, one has to complete all these tasks during a specific time in the twelfth month of the Islamic calendar. Completing Hajj is one of the five sacred requirements of Islam. This year's Hajj, if I have interpreted Google correctly, is scheduled to take place between approximately December 8 and December 29, 2007.

Two years ago, there were hardly any Iraqis going on Hajj. According to one Iraqi Hajja I talked with, "Iraq at that time was a nightmare. We couldn't even leave our houses -- let alone go all the way to Mecca. When I went that year, there were very few other Iraqis on Hajj. It just wasn't safe."

Last year, Hajjis from Iraq had a really hard time of it too. According to Reuters, "Gunmen opened fire on two buses of Iraqi pilgrims returning to the Shi'ite city of Kerbala from the haj at Mecca in neighboring Saudi Arabia on Wednesday, killing 11 and wounding 14, officials said. The governor of the mainly Shi'ite province of Kerbala, Aqeel al-Khazali, blamed the apparently sectarian attack in the Nukhaib district of mainly Sunni Anbar province on 'false' reports on Tuesday by Sunni community leaders that returning Sunni pilgrims had been kidnapped in the desert." Going on Hajj was still a pretty iffy proposition last year.

But what about this year? Did Iraqis think it might be safe enough now to give it a try? I asked around -- and opened a whole new can of worms!

The first people I asked were the neighbors of an Iraqi police lieutenant whose home had been destroyed by a suicide bomber. "We can't go on Hajj! We are just poor farmers and do not have any money. We can barely feed our families as it is. But even if we did have the money, we would give it to the lieutenant's family to help them have something to live on instead." Can they do that? Apparently they can. Later on, someone told me that giving the same amout of money to charity as it would take you to go on Hajj is an acceptable substitute to fulfill one's Hajj obligation when going on Hajj presents too difficult a challenge. And apparently these people had a whole BUNCH of challenges. Poverty, danger, grief. God was obviously going to write a note giving them an excuse on this one!

Another Iraqi said that he just wasn't all that religious. "I'd rather go to Baghdad -- or America." America as the new Mecca? Not! The guy obviously hasn't been there lately. He would probably end up working at a McDonalds doing double-shifts-plus in order to be able to come up with the rent for an apartment in East Oakland that he would still have to share with ten other guys.

The next person I asked about Hajj clarified things for me even more. "Jane, there are 1.3 billion Muslims in the world," he told me, "and if all of them descended on Mecca at one time -- even if only the adults came -- it would be chaos." I could see his point. The whole country would probably start to tilt to the west. There are already three to five million pilgrims arriving there each year as it is now.

"So the Saudi government is forced to limit the amount of visas it issues to each country, based on their population. I think the amount is 10%. So America is issued visas for 10% of its population -- so that every American Muslim has a solid chance of going on Hajj. But for we Iraqis? 10% is not very much, considering maybe 60% of the population would like to go. So. A visa to Mecca is a very important commodity."

"So how does the government of Iraq decide on how to give the visas out?"

"Theoretically, they are supposed to only be distributed to people over 50 years of age -- assuming that the younger Muslims will have a chance to go later, when they are older. But in actuality, Jane, most of the visas are given to Shias. We Sunnis don't really stand a chance. My father has applied for a visa every year for the last five years and he's got nothing. If you are connected, you get a visa. If you aren't, you don't."

"But what exactly happens next, once you DO get a visa? How do you get there? Is it safe?"

"Once you get your visa, you go to a travel agency and buy a package tour. Most tours get there by air. There are a few buses across the desert but most pilgrims prefer to fly. But there again you have the same problem. Most travel agencies are run by Shia." Hummm....

Then I interviewed the Lion of Al Ambar, my favorite go-to guy. "To me," he said, "it doesn't matter if we are Sunnis or Shia. We are all Iraqis. And that is the most important thing to me. We must all work hard to restore the rule of law to Iraq."

And finally, last but not least, I heard from one man who had already been on Hajj -- and he was truly outspoken. He did NOT mince words. "9-11 was done by the American government but Saudis were accused of it and Afghanis, Iraqis and all Muslims are being punished for it.," he stated emphatically. "Two countries and two peoples have been destroyed and the freedom of all Muslims have been curtailed even in their own homes for 9-11, a crime America has committed and it's been blamed on the Muslims. Yet all the guilt the 'good people' see is the loss of American boys and girls and the loss of the American tax money. Hey, you do not need Ahmadinejad to make Americans afraid. If you really are worried about another 9-11 happening, all you need is to make the American government feel that the American public is waking up or there is a slim chance that could it could happen; then the government will do it again to keep them busy enough not to think about the government crimes inside and outside the USA! So please stop trying to waken the Americans. Let them keep hating everybody for crimes that they, the Americans themselves, have committed. They are not all that naive or stupid, but they enjoy thinking that they are superior and hating the others for being their victims. At any rate, please stop trying to wake them up and save us, the Muslims, the pain of yet another crime or set of crimes against us for no wrong we did other than having oil and being Muslims. Please, Jane, please!"

Whew. That's a tall order. Maybe we could start by making every candidate in the 2008 presidential race and all members of Congress go on Hajj this year so that they could get more insights about Islam and how the vast majority of Muslims are upright and moral; people you would be proud to know; definitely not terrorists. I can see it all now -- Jeb Bush and Nancy Pelosi and Hillary Clinton and Dennis Kucinich and Ron Paul, all camping out at Mina and throwing stones at the devil. Works for me. But I digress.
Getting back to my original question, "Do Iraqis finally feel safe enough to go on Hajj this year?" I wish I could offer a more concrete answer but my core sample just wasn't adequate enough to clearly say yes or no. But I did learn that many Iraqis are worried about corruption as an issue, that the poverty level in rural Iraq is high and that many Iraqis seem to have other things to worry about rather than Hajj right now -- clean water, functioning schools, sewage treatment, rebuilding their communities, etc. But it still will be interesting to see how this year's Hajj journey plays out in Iraq.

And perhaps the Saudis could make an exception to their visa limitations and issue more visas to Iraqis, especially Sunnis. God knows that Iraq can use all the help it can get.

PS: I'm currently trying to re-embed and return to Iraq. This time I would like to embed in the Baghdad Red Zone so that I can see what is going on there. And I would also like to embed in Afghanistan. And if I do get a chance to go to Afghanistan, it will be interesting to see how many Afghans will be going on Hajj this year too. And speaking of national groups going on Hajj, did you know that the most well-represented group there is composed of Indonesian young ladies?

Because in Indonesia, it is customary to go on Hajj before getting married so these girls are truly FIERCE about completing their Hajj. It's sort of like an episode of The Bachelor -- Mecca as they stridently compete for the right to marry once they get home.
Posted by Jane Stillwater at 11:22 AM